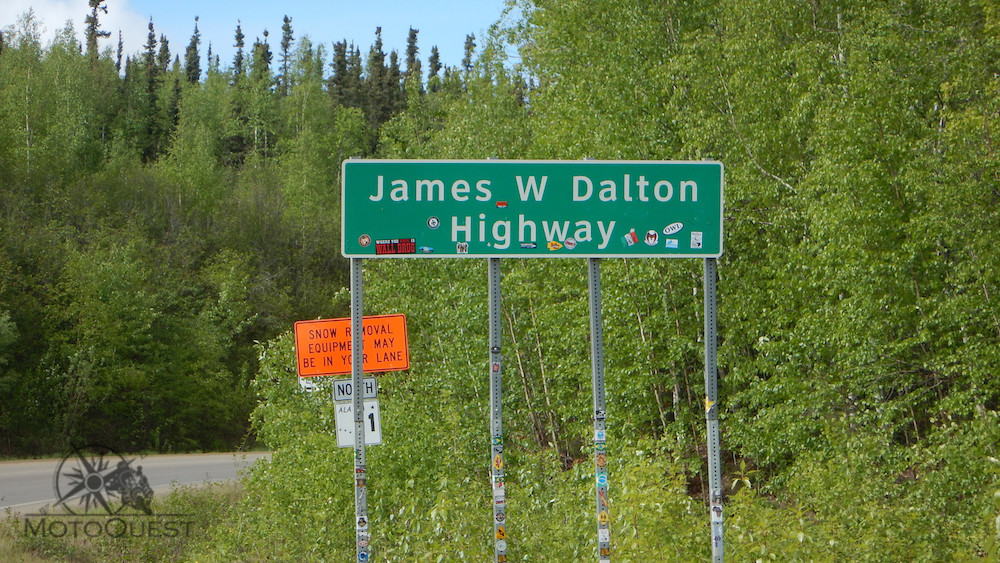 “It’s not about the destination, it’s about the journey.” This mantra is a common exchange among motorcyclists and up here in Alaska is a philosophy we instill on each one of our guided adventures. Limitless natural beauty awaits but without the highway system we would have no way to travel around to experience it. This week we take a look at a few of Alaska’s most famous highways, how they came into existence, and how we utilize them today to share this great state with groups of riders on our guided motorcycle adventures. We hope you enjoy and consider making 2017 the year you ride Alaska!

In 1942 a call went out to all able-bodied soldiers looking for work. The job description read: “Men hired for this job will be required to work and live under the most extreme conditions imaginable. Temperatures will range from 90 degrees above zero to 70 degrees below zero. Men will have to fight swamps, rivers, ice and cold. If you are not prepared to work under these and similar conditions, do not apply.” More than 10,000 enlisted men stepped forward and persevered through miserable conditions for eight months, officially opening for use on November 20, 1942.

Today, MotoQuest travelers on the North to Alaska Adventure get to see everything that this stretch of road has to offer through British Columbia, the Yukon Territory, and eastern Alaska.

Learn more about our North to Alaska Adventure

Throughout the 1800s, the only way to travel into the heart of Alaska was by river, that is until 1989 when the U.S. Army built a pack trail aimed at connecting the port town of Valdez to the Klondike gold mining operations. The Army kept this trail open in order to keep its outposts connected, and thanks to the Fairbanks gold rush in 1902, this trail became one of the most important routes Alaska. In 1910, U.S. Army General Wilds P. Richardson headed the project to upgrade the trail to a wagon road, and a combination of construction workers and failed gold prospectors built the Richardson Highway. The road was again upgraded in the 1920s to accommodate automobiles.

The Richardson Highway today runs 368 miles from the southern port town of Valdez to the city of Fairbanks. It is consistently at the top of the list of most stunning roads in Alaska, so it’s should not come as a surprise that riding the Richardson is one of the many highlights on our Best of Alaska Adventure. One of the most rewarding stretches of this road lies at Thompson pass, a rider favorite for its beautiful pavement and incredible views.

Learn more about our Best of Alaska Adventure

Oil was discovered in the far northern reaches of the state in 1968, and since then the Prudhoe Bay oil fields have been one of the largest domestic sources of oil for the United States. In 1974, construction on the Trans-Alaska Pipeline System began, and a road was built alongisde it to service both the pipeline and the oil production facilities of Prudhoe Bay. The Dalton Highway was named after lifelong Alaskan and Arctic engineer James W. Dalton, who was an early oil exploration consultant in northern Alaska.

Today the Dalton Highway is known as one of the most treacherous roads in the world. Only 100 of the 414 miles are paved, the rest made up of a combination of dirt, gravel and likely mud.  It demands respect and considerable riding skills, so much so that Phil’s popular “10 Dos and Don’ts of the Dalton” continues to educate riders looking to tackle the trip up to Deadhorse and the Prudhoe Bay Oil Fields. Each year MotoQuest takes riders on this very road on the Prudhoe Bay Motorcycle Adventure.

Named after the highest peak on the North American continent at 20,310 feet, the Denali Highway was opened in 1957 as the first road to allow access to Denali National Park (then known as Mount McKinley National Park). This made it much easier for travelers to experience the pristine wilderness of this preserved landscape, resulting in an increase from 5,000 park visitors in 1956 to 25,000 visitors in 1958.

The Denali Highway continues to be a favorite among MotoQuest riders, despite the fact that it is mostly unpaved and is susceptible to washboarding. The road is not maintained and is only open from mid-May to September each year, and services are scarce along the way. The reward for riders is breathtaking scenery including views of the Alaska Range, and MacLaren Summit takes you over the second highest point in the Alaska road system at 4,086 feet. MotoQuest riders enjoy views of Mt. Denali and other amazing sights as they traverse the Denali Highway on our Northern Lights Adventure.