As promised, I’m back with more about The MotoQuest Trail of Lewis & Clark Adventure. Last time I shared some of the extraordinary roads to be ridden.

Now, let’s talk about the immersion into a uniquely important and historical American saga this ride presents! 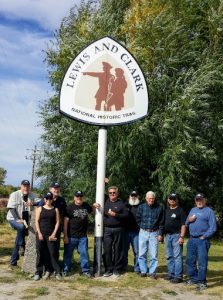 Prior to my involvement with MotoQuest, in decades of riding around the spectacular Pacific Northwest, I would spy the iconic signs commemorating the Corps Of Discovery Expedition.

So numerous that oftentimes I would mock the pose of the pointing Meriwether Lewis silhouette to my riding mates.

Of course I’d learned about the epic venture underwritten by Thomas Jefferson; as most school children in the US do. But I never realized the scope of the undertaking and impact on an expanding nation until I read the tome

Stephen E. Ambrose (A must-read for any history buff and essential for tour participants).

Very well researched and written Ambrose chronicles one of the greatest adventure stories of all time!

The MotoQuest Trail of Lewis & Clark Adventure is a chance to imagine oneself as part of the amazing tale. Initially, as we head east, riding aside the mighty Columbia River and begin to understand its significance to the expedition.

Next, Northeastern Oregon and Idaho provide a glimpse of the traditional territory of the Nez Perce Tribe. Instrumental in the survival of Lewis & Clarks quest to reach the Pacific Ocean. The “handsome featured” natives welcomed the travelers, shared route information, taught them how to make dugout canoes and most importantly traded horses for previously unseen goods.

We spend two nights experiencing Lemhi Valley in Eastern Idaho. The Lemhi Shoshone woman Sacagawea was born here and, at the age of 16 when she joined, proved to be invaluable to the outcome of the expedition.

Big Hole National Battlefield in Montana, while not part of the L&C saga, is a must-stop on our journey. It offers a somber remembrance of the price paid to settle the west. It is with heavy hearts we ride on. 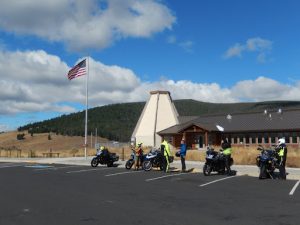 A short stop on the outskirts of Dillon, MT allows us to stand on the very spot atop a small hill,  Clark’s Lookout,

where Lt. Clark paused to survey the surrounding area.

Great Falls, MT is where we begin to follow the intrepid explorers actual path west. We witness the series of five falls that required an eighteen mile overland portage by the explorers. We visit Lewis & Clark Interpretive Center! Perched above the Missouri River it contains inspiring exhibits and presentations enlightening us to the grandeur of the exploration of the Louisiana Purchase. It strives to impart to visitors a personal sense of Thomas Jefferson’s vision of expanding America to the west. 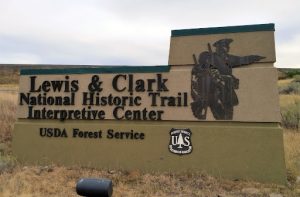 I have given you a taste of the history MotoQuest’s Lewis and Clark Adventure has to offer. There is so much more to experience: the legendary LoLo Pass, Wieppe, ID where Lewis & Clark first encountered the Nez Perce, Dismal Niche on the Columbia River and of course Fort Clatsop, home for the expedition during the 1805-1806 winter, to name just a few. 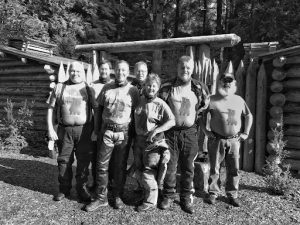