We see some some pretty unusual road signs in our travels around the globe. Some warn of animals and road hazards, or promise us delightfully curvy roads ahead! Others encourage safe driving, even though you are hundreds of miles from civilization. No matter where you are in the world, keep an eye on the signs, and you’re sure to find something interesting along the way. 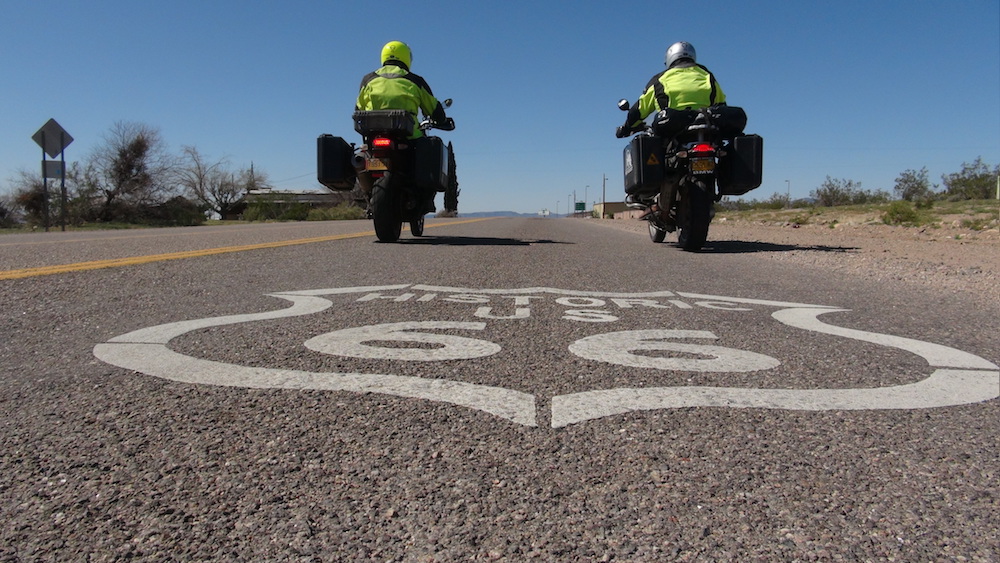 A Touch of Nostalgia

Few things scream classic Americana like historic Route 66. This highway was constructed in the 1920s to connect Chicago and Los Angeles through the heartland of America. For decades this road was a symbol of American tourism, but by the 1970s almost all segments had been bypassed by modern four-lane highways as a result of the Interstate Highway Act. Although Route 66’s days as a transportation corridor are long gone, some historic sections still rich with Americana flavor remain. Whether you find it painted onto the asphalt itself or lit up in neon to help promote vacant motel rooms, the Route 66 emblem is sure to stir some feelings of nostalgia. 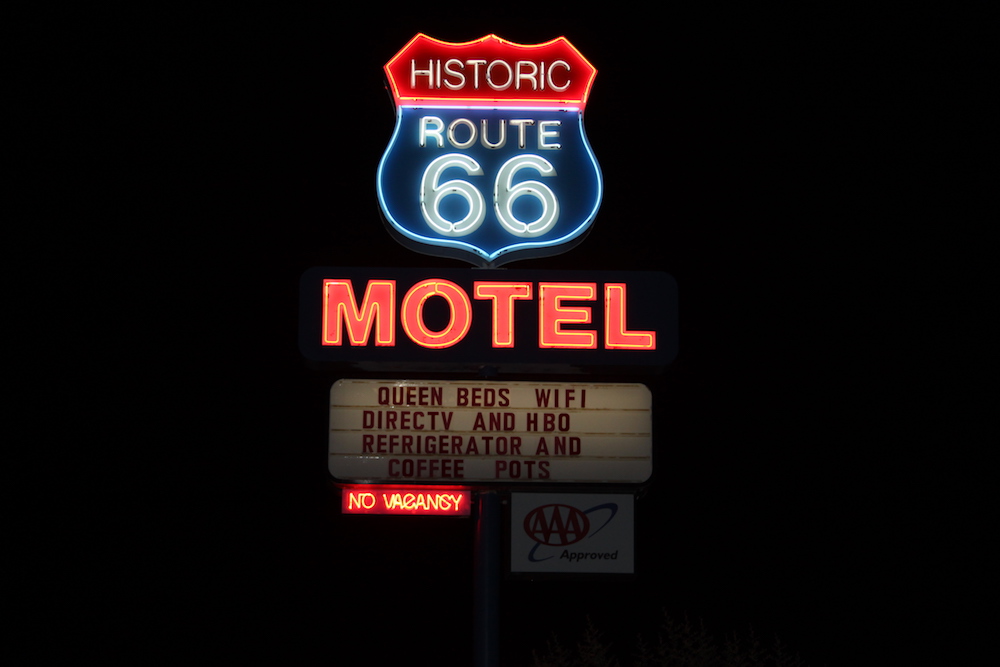 We make a point of riding some of the best sections of this legendary highway on our American Southwest and Wonders of the West Adventures, complete with stops at roadside attractions trapped in time. Part of the charm of this ride is the series of Burma-Shave signs. These were advertisements that the shaving cream company used to grab the attention of passing motorists, and the series along Route 66 reads “Big mistake many make, rely on horn instead of brake.” 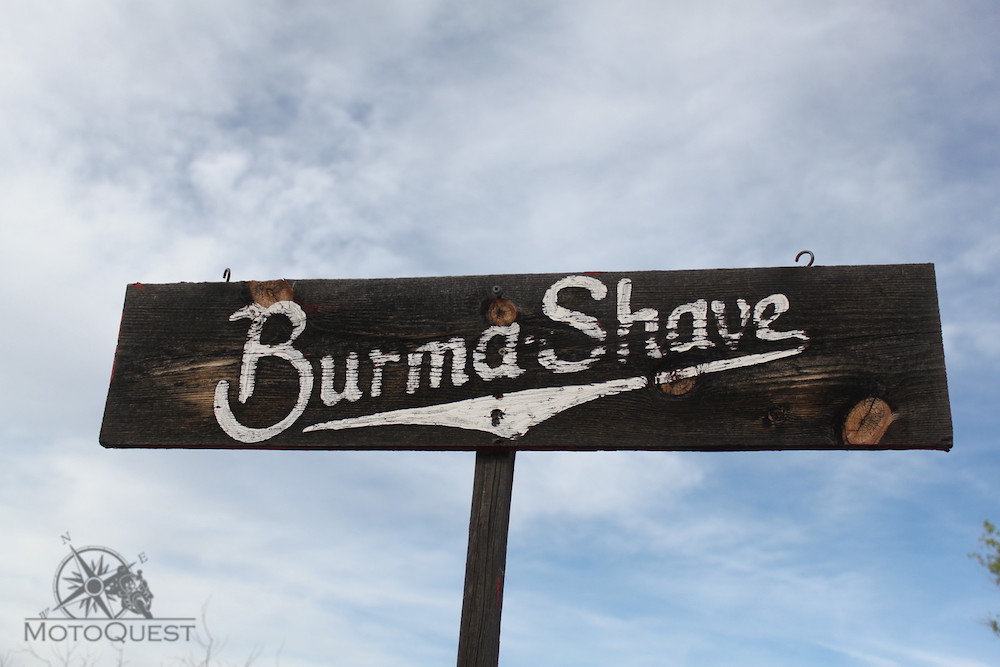 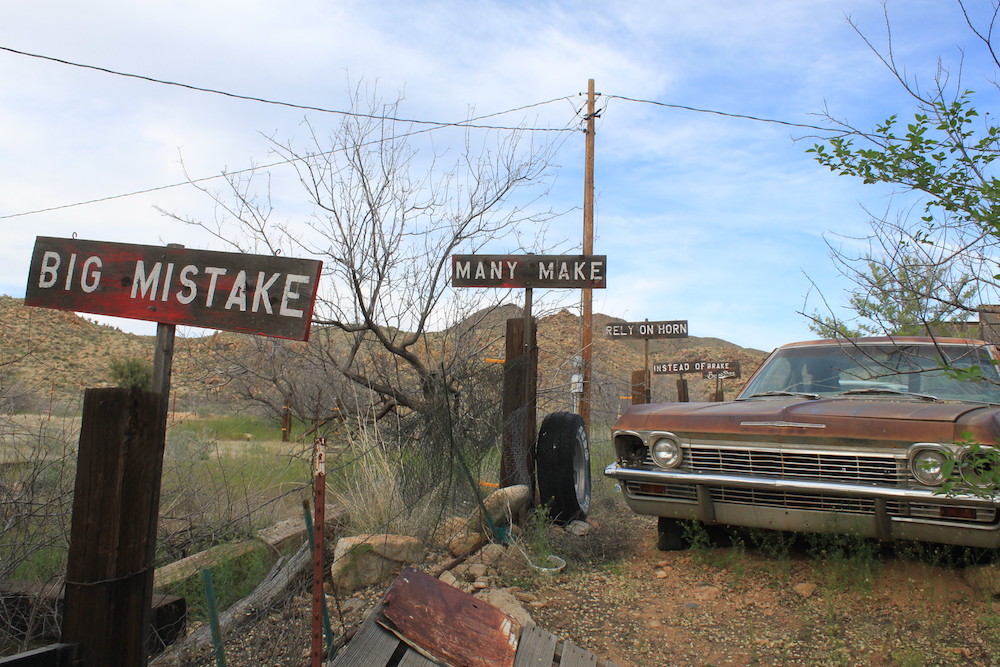 We’re not in Kansas anymore, Toto… 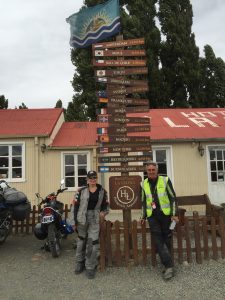 If you do a good bit of traveling you are bound to occasionally come across a sign that reminds you just how far from home you really are. As you look up see how many thousands of kilometers you are from New York or Rio de Janeiro, you might think “We’re not in Kansas anymore, Toto.” Indeed you’re not, and seeing these signs is a happy reminder that you are instead out in the world, exploring a new place!

Other signs are a more sobering reminder that you are a traveler in a foreign place, like this sign in northern India that forbids animal sacrifices of any kind.

Or this sign in Baja, Mexico advertising gasoline. It’s really more of a table with a bunch of gas jugs on it than your traditional PeMex station, but beggars can’t be choosers when you’re on those lonely stretches of desert highway. 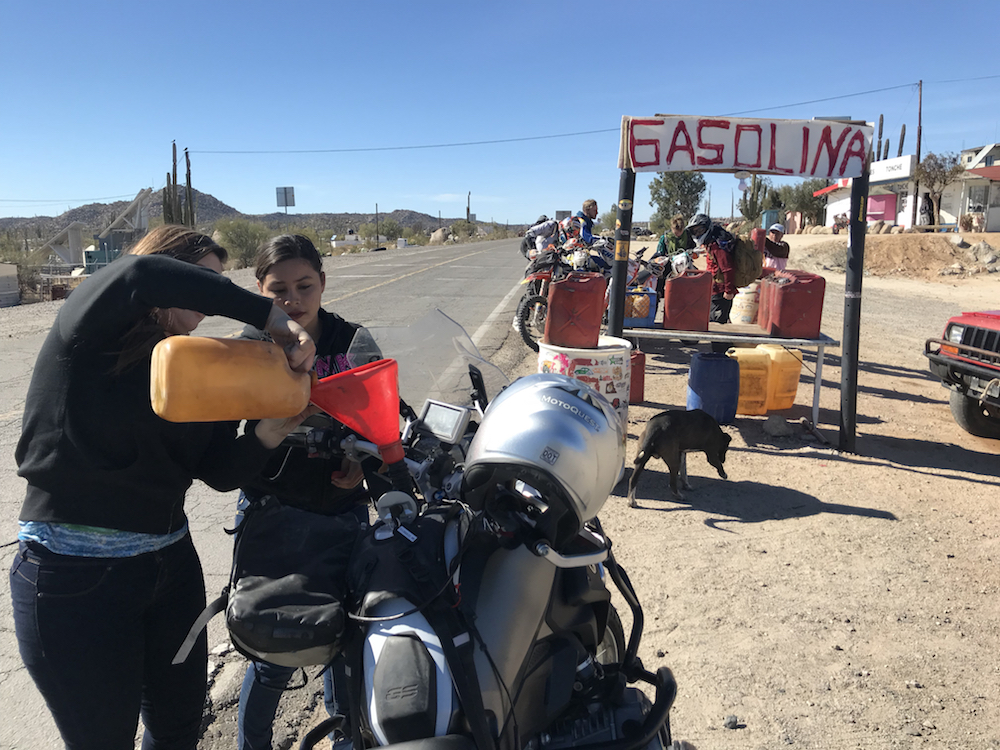 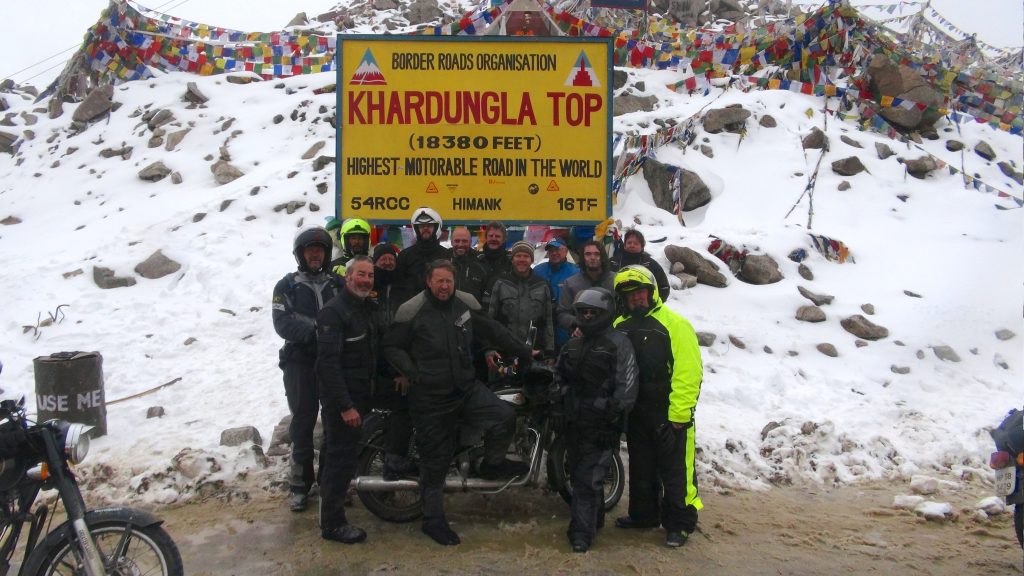 In addition to extreme altitudes, we travel to the edges of the earth on a few of our tours. Our Patagonia End of the Earth Adventure can best be described as “epic” for many reasons, but one of them is definitely the tail end of the trip when we spend some time in Ushuaia, the world’s southernmost city. 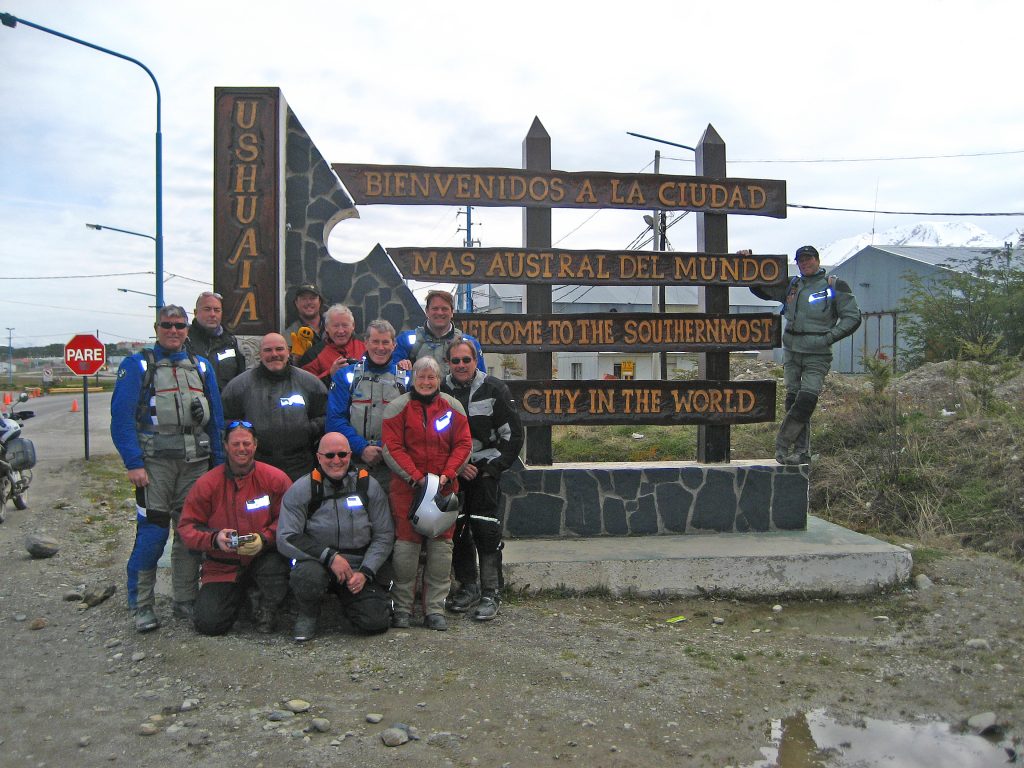 Likewise, riders on our South Africa Backroads Adventure love to stop at the very southern tip of the African continent, where the Atlantic and Indian oceans meet. Contrary to popular belief, this is not the famous Cape of Good Hope, but is actually Cape Agulhas about 90 miles to the southeast. 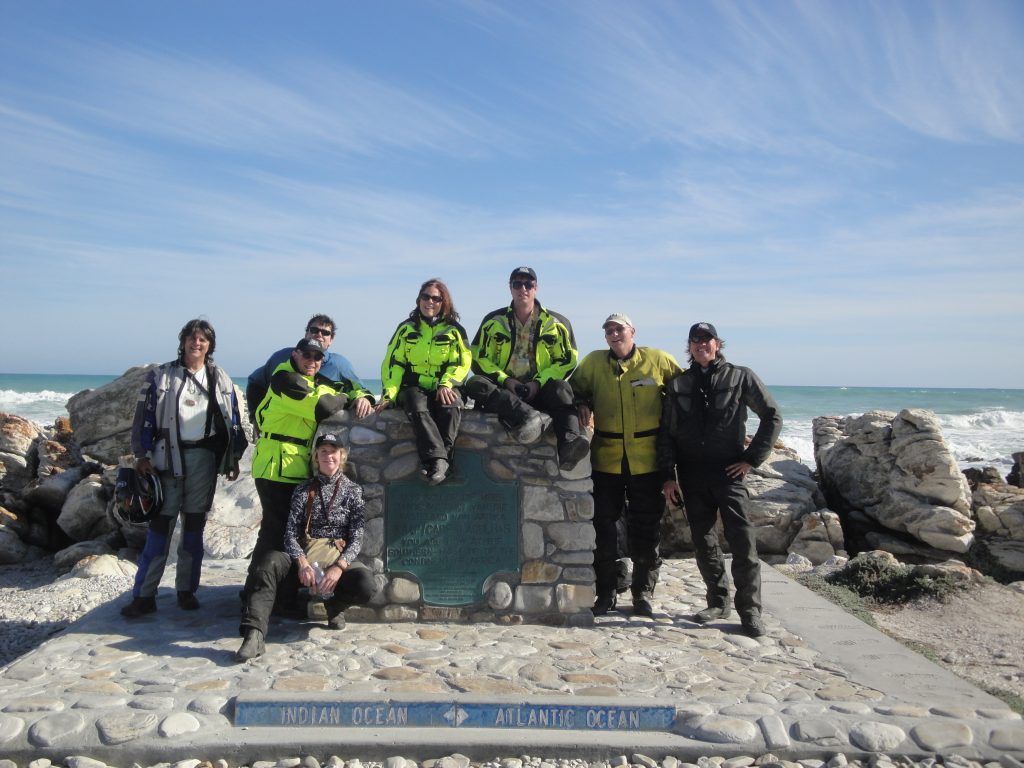 Up in our home state of Alaska we find a few geographical extremes as well. We visit Anchor Point, the most westerly point on the North American highway system on our Kenai Peninsula Adventure. And riders that brave the Dalton Highway on a journey to Prudhoe Bay are rewarded with the knowledge that they have ridden as far north as they can go on the continent’s road systems.

While our final geographical point of interest is not quite as extreme as the others, it is quite significant in an astronomical sense. Most of our guided Alaska adventures afford riders the opportunity to visit the Arctic Circle, and the iconic sign shown below. This latitude line marks the point where you will see 24 hours of darkness during the winter and 24 hours of daylight during the summer. Now that’s extreme! 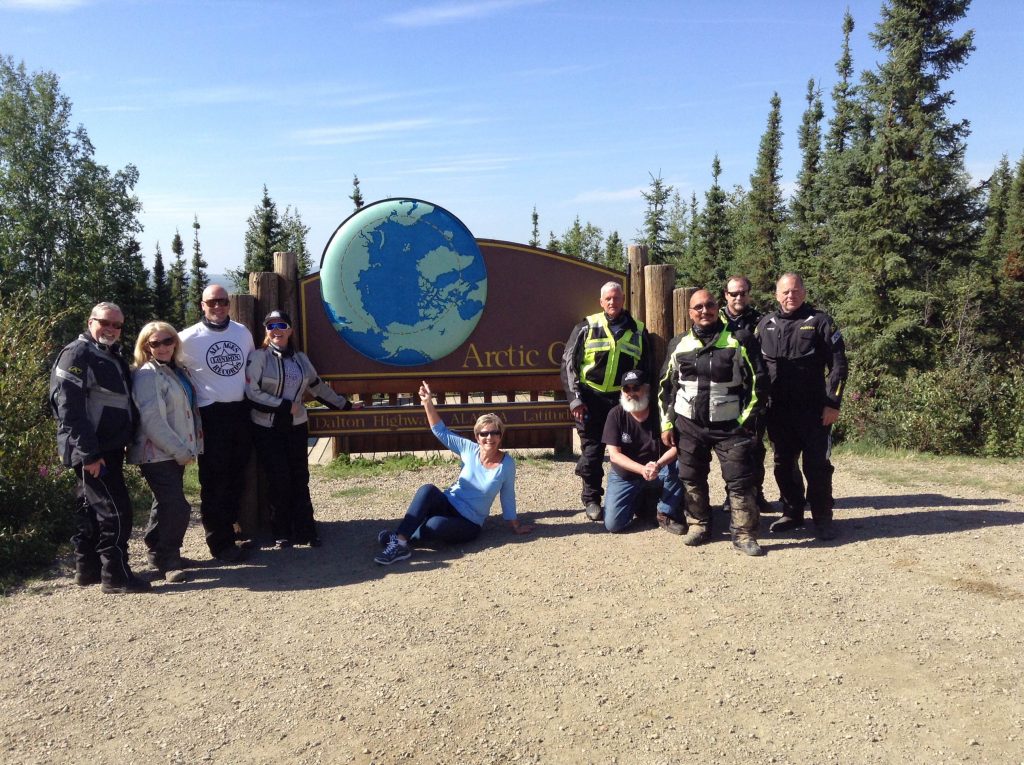 Like any good motorcyclist, we get pretty excited when we see road signs “warning” us of upcoming curves. Everyone’s favorite road sign on our Trail of Lewis and Clark Adventure is this one at Lolo Pass, promising us 99 miles of winding roads ahead!

In fact, this Dalton Highway sign was raised to about ten feet off the ground in an effort to discourage people from placing stickers on it. While a few intrepid souls got their stickers to the top, you’ll see most settled for the sign posts. 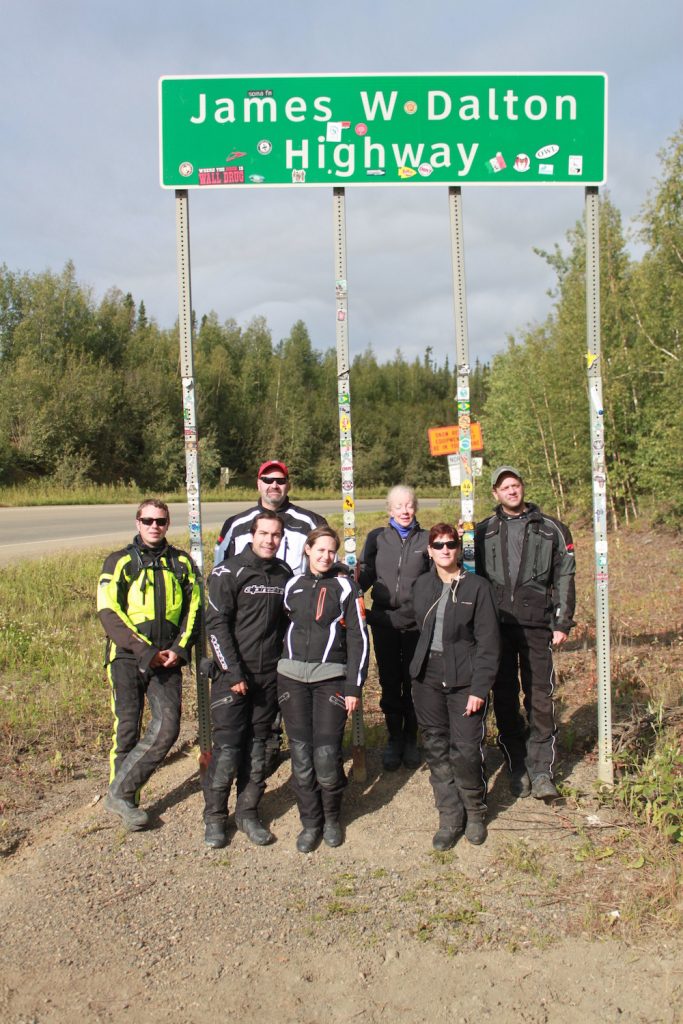 Mike’s Sky Ranch is a motorsports haven found on our Baja Backroads Adventure. Since the whole Baja peninsula is rich in racing history, hosting the Baja 500, Baja 1000 and other desert races each year, Mike’s Sky Ranch is a hot spot for trophy truck teams and two-wheeled explorers alike. 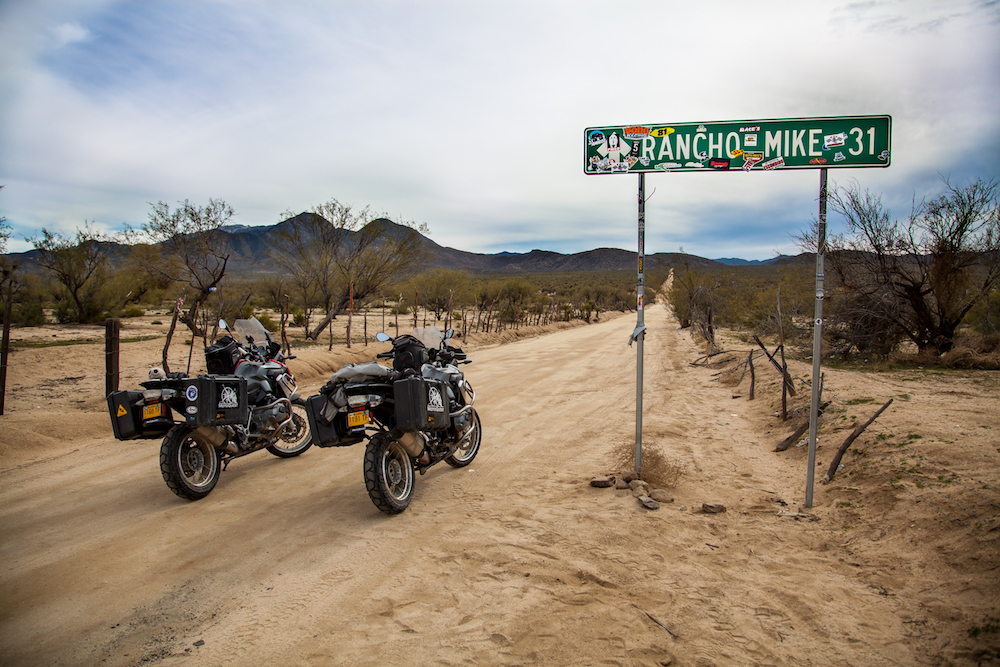 Our Best of Baja Adventures also feature some time in San Felipe. This colorful oceanside sign is a perfect representation of the good times you will have in this town. 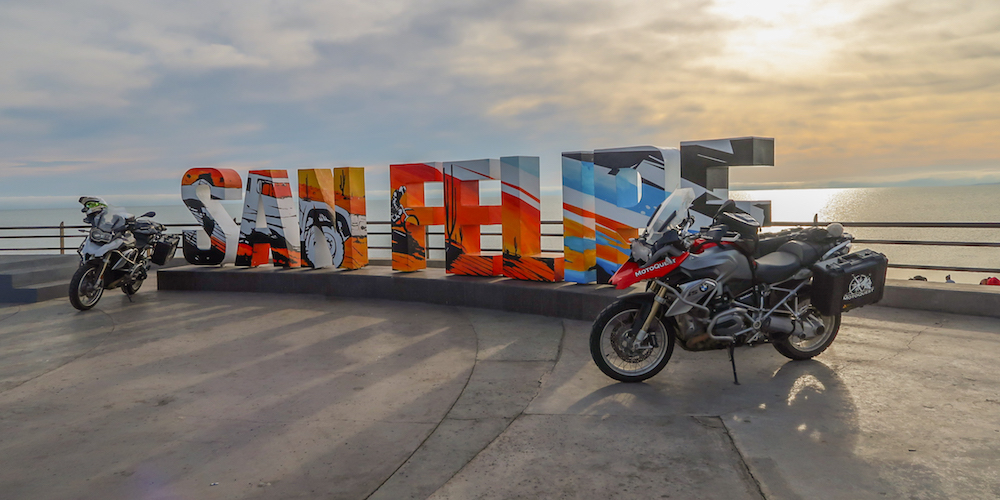 However, some signs provide legitimate warnings of road conditions to come. This one in India warns of falling stones, which is a very real hazard on our India Touch the Sky Adventure. We do frequently come across boulders as large as vehicles blocking some of the mountain roads we ride. 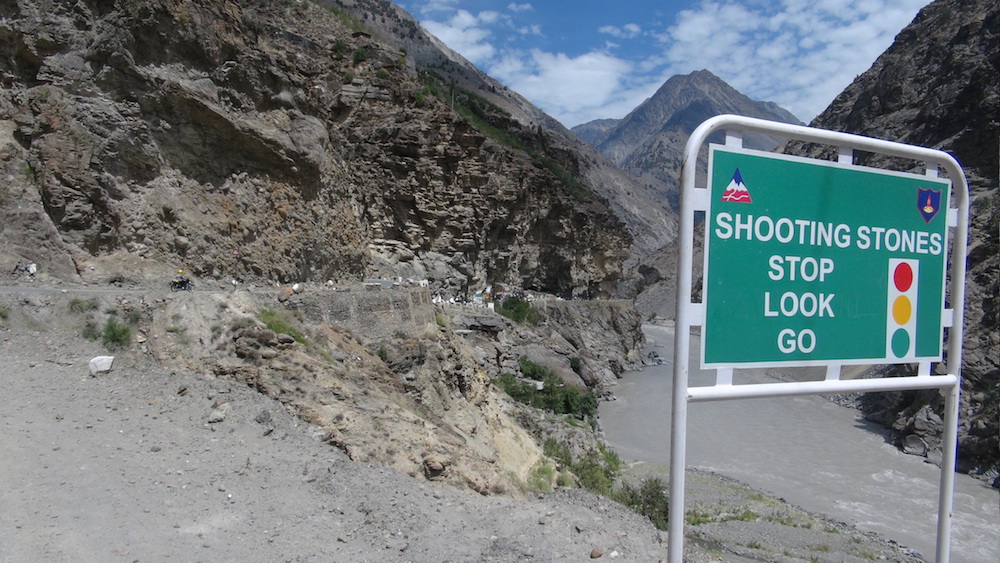 Riders on our Prudhoe Bay Adventure in Alaska won’t have to worry about rock slides, but avalanches and the snow removal machinery required to clean them up are definitely present.

Patagonia is one of the windiest places that we ride. Fortunately it is also one of the most beautiful places we ride, which makes up for the challenges of riding in the wind. 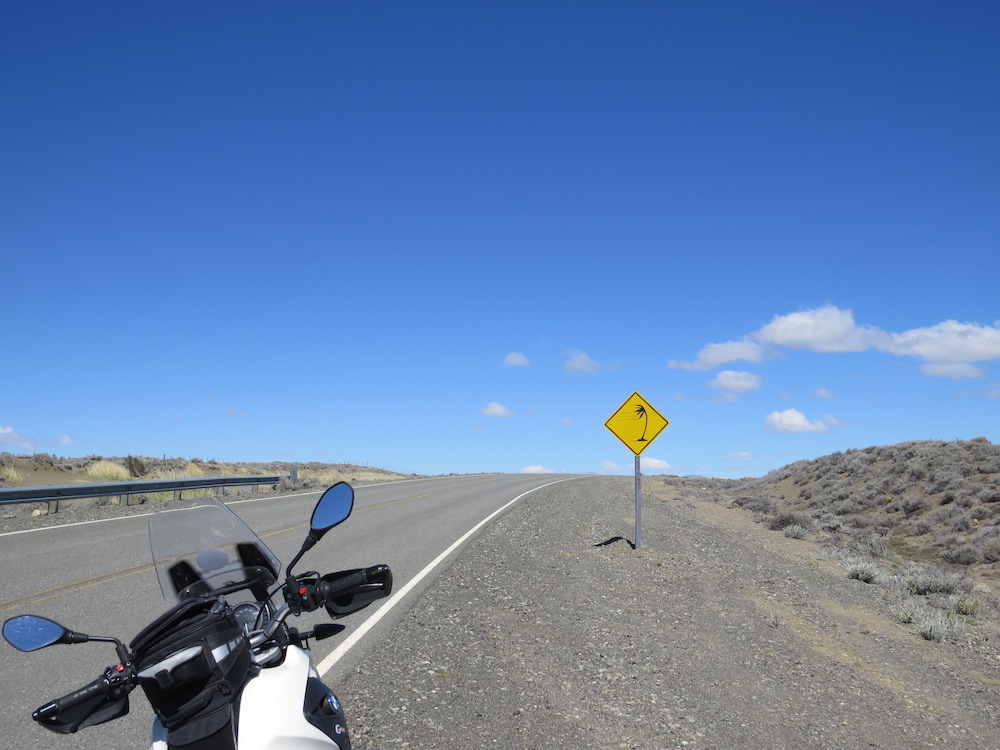 Watch Out for Wildlife!

Here in the United States, most motorists in rural areas know to keep an eye out for deer, moose, bears, coyotes, and of course smaller animals. This is especially the case in Alaska. 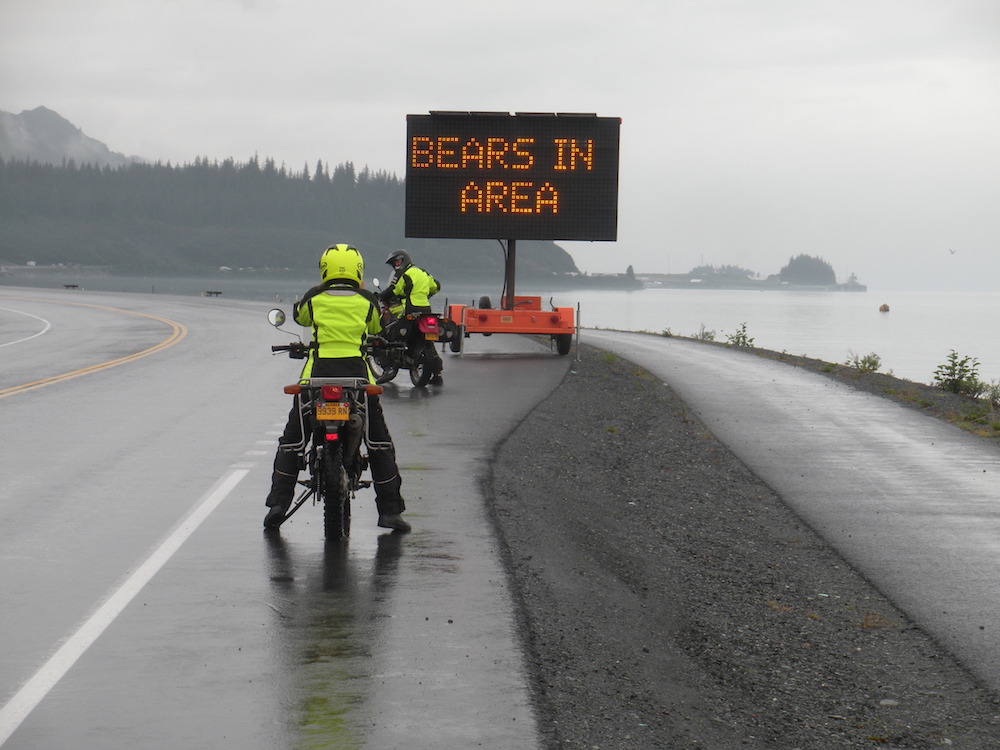 But this is just the tip of the iceberg in comparison to places like South Africa. 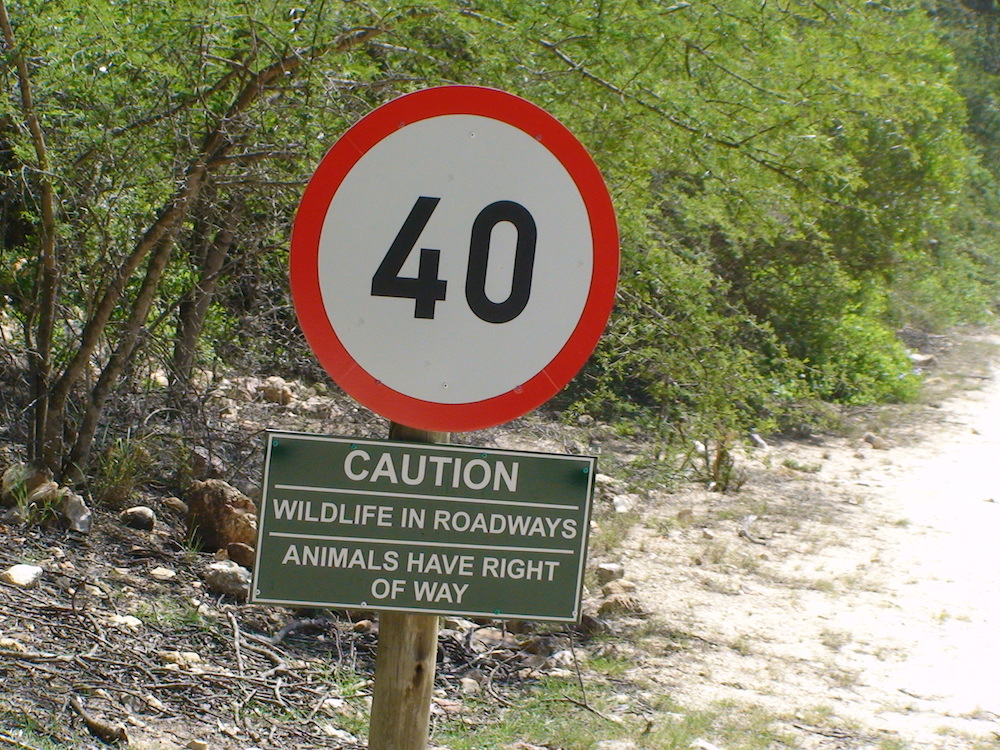 To be fair, we spend a lot of time riding through nature preserves, and even visit the Addo Elephant National Park.

Still, to see signs warning of lions, leopards, and sharks is a reminder that we are visitors in their territory. 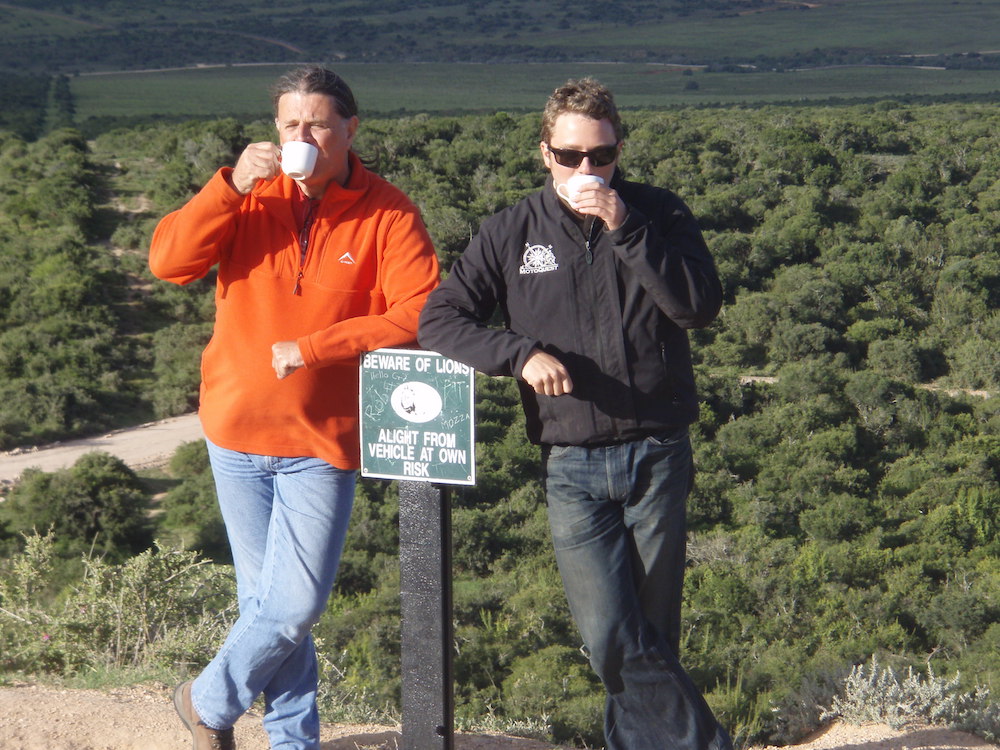 And then there’s the mighty dung beetle. Even they have the right of way on the roads! 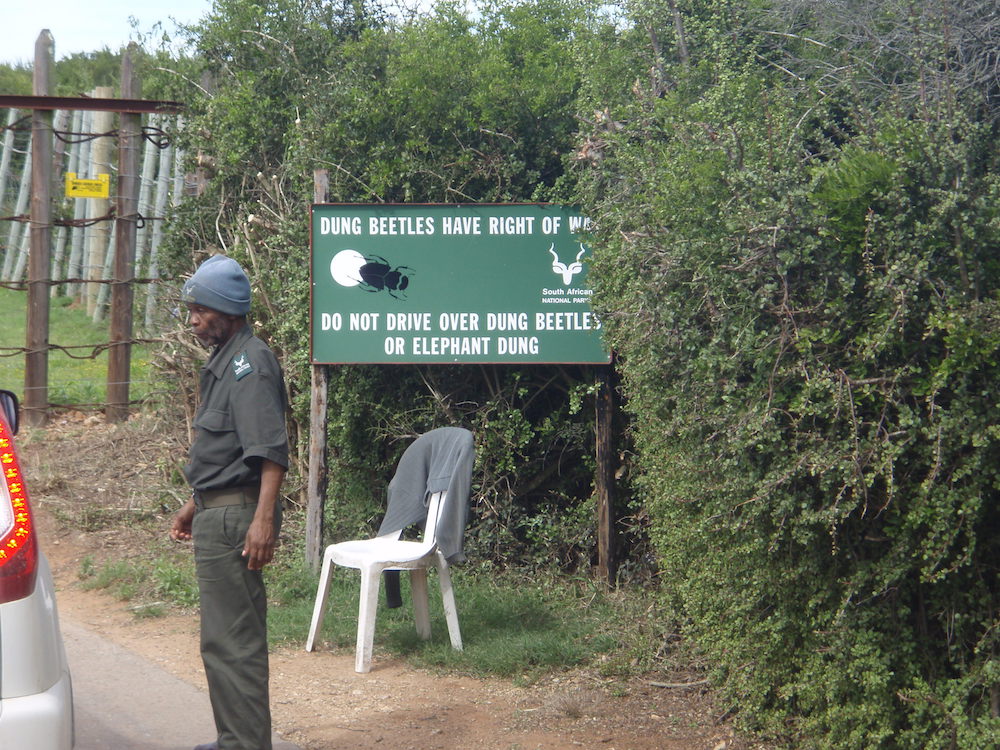 They don’t call it the Last Frontier for nothing! Alaska is a little rough around the edges. You will see a lot of things here that you will not see anywhere else, road signs included! Did you know that in Alaska you need not only look both ways, but also up? 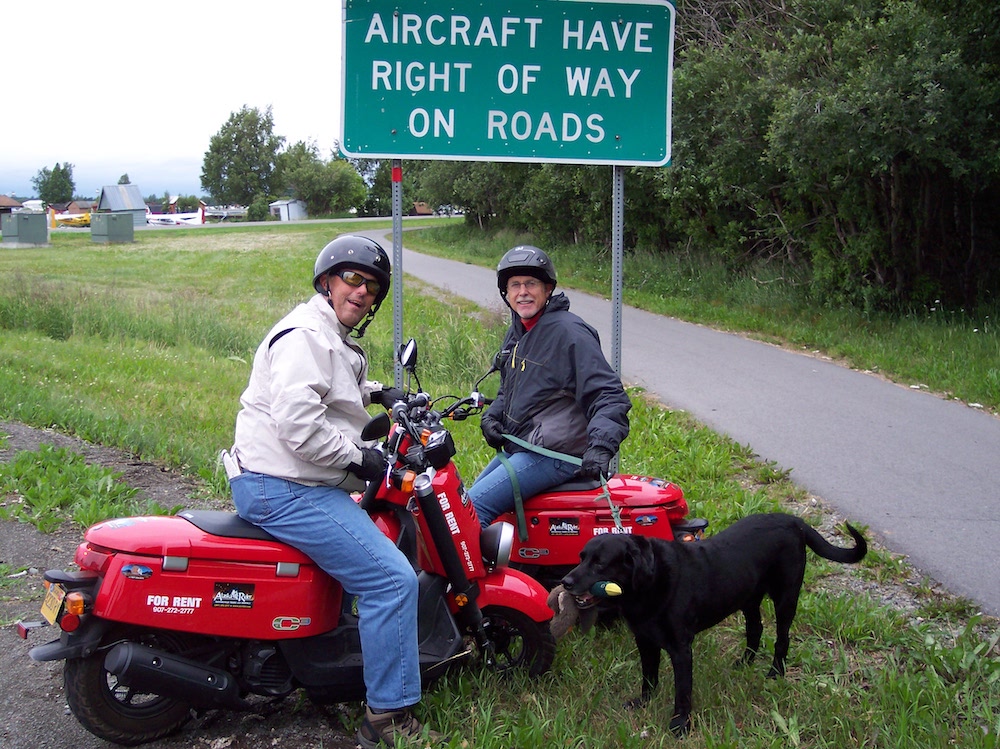 You have to watch where you park your bike, as well.

Back on the road, you will find miles and miles of glorious paved highways that feature some of the most scenic riding imaginable. Most of these roads come to an end, however, and some of our Alaskan adventures allow riders to explore off the beaten path.

Alaskans are very fond of their firearms, and often use unsuspecting road signs for target practice. There’s a saying here that the more a sign tells you to do, the more bullet holes it’ll have.

We had to save the best for last! India’s Border Roads Organization has been maintaining the roads of India’s border regions since the 1960s. In addition to the work they do on the ground, the group has also installed a variety of road signs to remind motorists to drive carefully or to be good citizens. 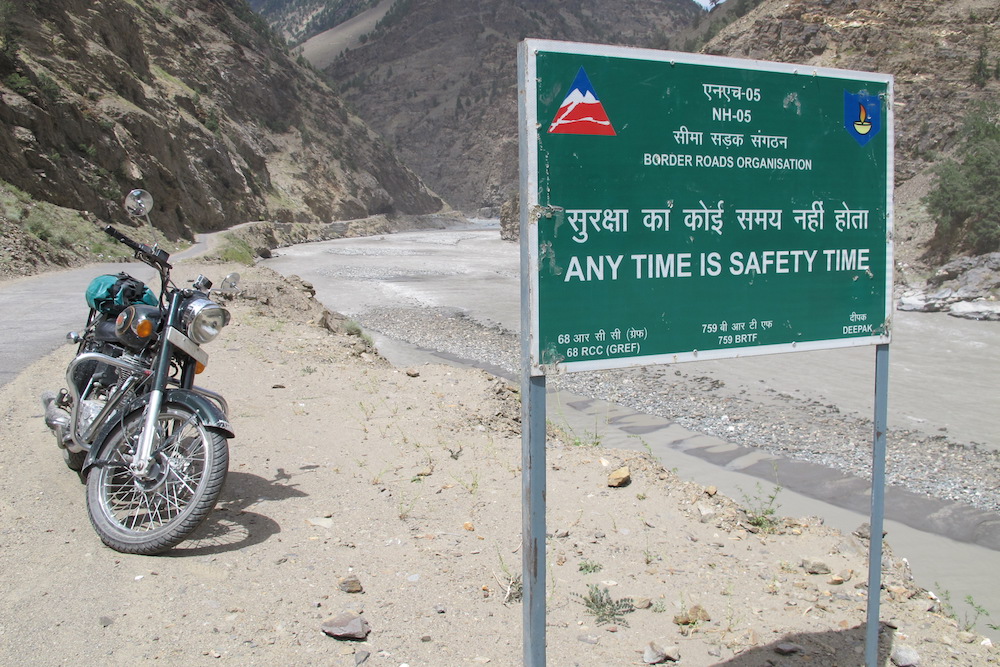 There is a certain charm in seeing these clever rhymes as you ride through some remote areas of Northern India on our Touch the Sky Adventure.

The signs are so popular that we even came across a collection of framed photographs of these signs!

Thank you for joining us this week for our Road Sign Roundup! 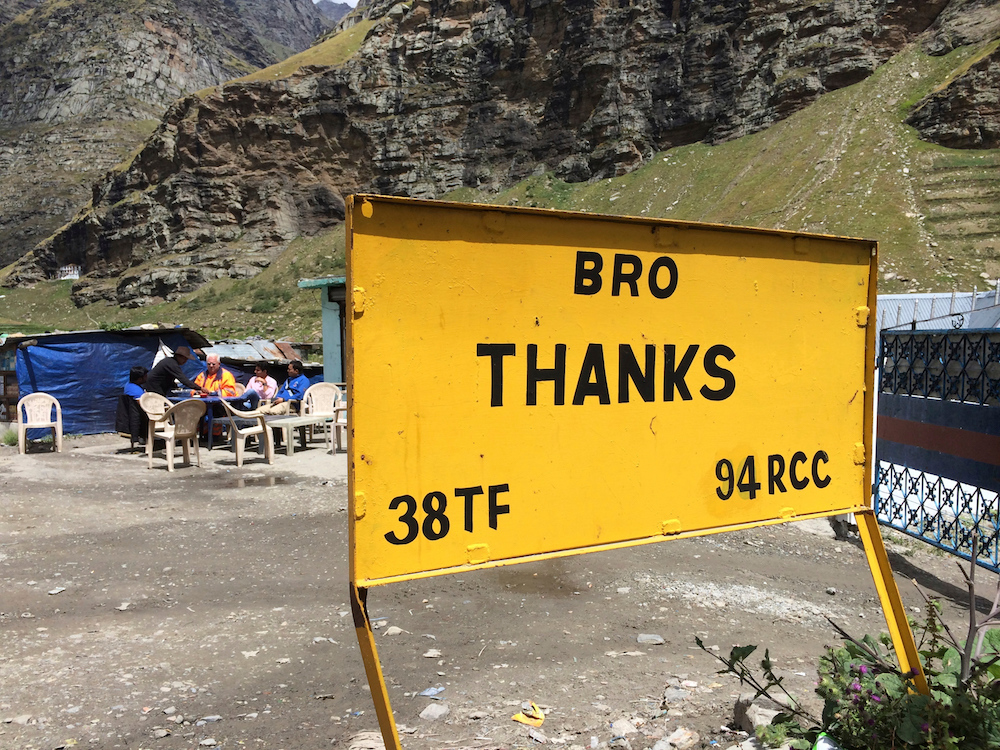