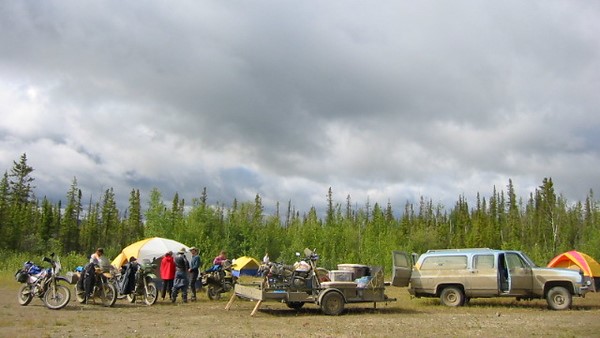 For today’s adventure, we’re jumping into a time machine to witness the evolution of MotoQuest from our humble beginnings. You may already be familiar with our company’s founder, Phil Freeman, and our global footprint, but are you ready for the tale of how it all came to be? Get nice and cozy, because it’s MotoQuest story time.

Picture this:
August of 1994
Hokkaido, Japan: The wildest and most natural of all the islands, Hokkaido represents 20% of Japan’s land mass, but only 5% of its citizens. This prefecture is known for great roads which crisscross the region, excellent ski resorts, and soothing hot springs.

A tall, skinny 24 year old fella from Alaska has landed a gig teaching English to local students through the Japanese Exchange Teaching program. He had no luggage. He did bring his mountain bike, skis (which weren’t useful in the summer), and, thankfully, some fresh underwear. This is all he had for two weeks. Believe it or not, he was an experienced young traveler: having already lived a year in Brazil and later 10 months in Ecuador through exchange programs, but was not yet a motorcyclist. 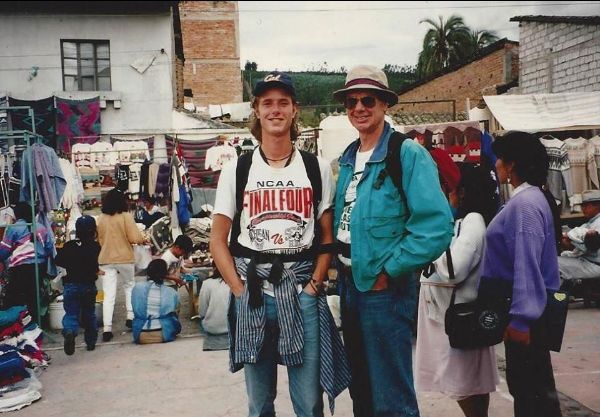 Young Phil with his dad in Ecuador

Phil had specifically requested to be placed in Hokkaido, and now found himself in a town of only 300 residents surrounded by mountains, rivers, and forests replete with wild bear, fox, deer, and salmon runs… which sounds a bit like his home in Alaska.

While riding his bicycle down a country road, knowing he would be here for at least a year, Phil was passed by a dozen or so motorcycles loaded with riders, passengers, and lots of gear strapped to the back. By the end of the summer, he had come upon a campground beside the lake on his commute to work which was completely full of motorcycle campers every morning, and vacant in the afternoon. Hokkaido is where Japanese motorcyclists go to experience the nature of the North!

That’s the moment it clicked. “How exciting would it be to explore this island on two wheels?”

Phil bought an old kickstart 250cc motorcycle from his teacher, learned how to ride, and found a new way to spend his free time. Less than a week later, as he was surrounded by tents and other motorcyclists, draining gas from the tank to fuel his camp stove and hunting on a map for points of interest he had heard of at a picnic table, he had the epiphany every motorcycle traveler comes to: I could do this for the rest of my life.

“I started saving some money, and realized I was going to launch this thing before I left Japan. There was no doubt.”

After two years of teaching English and exploring Hokkaido, Phil returned to Alaska determined to turn this lifestyle into a legacy. He wanted to share the beauty of Alaska with other motorcyclists who had also been bitten by the adventure bug.

Having flown down to Portland, Oregon to retrieve a motorcycle his family had held in waiting for him, Phil rode all the way back to Alaska, giving him 2,400 or so miles to contemplate a business plan. Once home, Phil rode around the state to take photos and consider itineraries with no idea what he was really getting himself into. “I had one bike, a little bit of cash, and had more time than anything before I started a job.”

1998  –  The fleet consists of two 1982 Yamaha Viragos, and one 1980-something Kawasaki Spectre stashed under a tarp beside a cabin in Girdwood, Alaska (40 miles south of Anchorage). 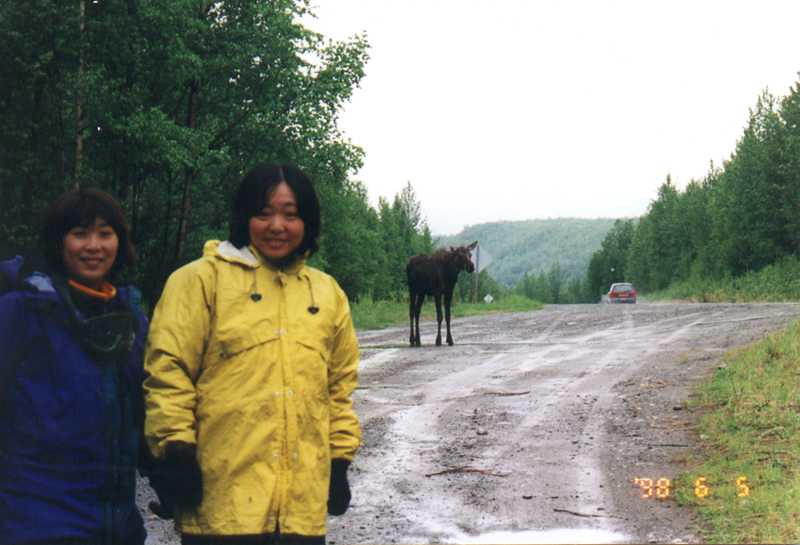 1998: Akiko and Asako get a warm welcome from the locals

With a business license under the name “Alaska Rider Tours”, Phil takes his first two guests on a ride around the state: a pair of riders from Japan. They ride without a support vehicle, camp on the side of the road, learn the culinary perfection that is peanut butter and jelly sandwiches, and within the first two days one of the Viragos breaks down. They finished the tour in Phil’s Subaru. These would be his only guests for the season. 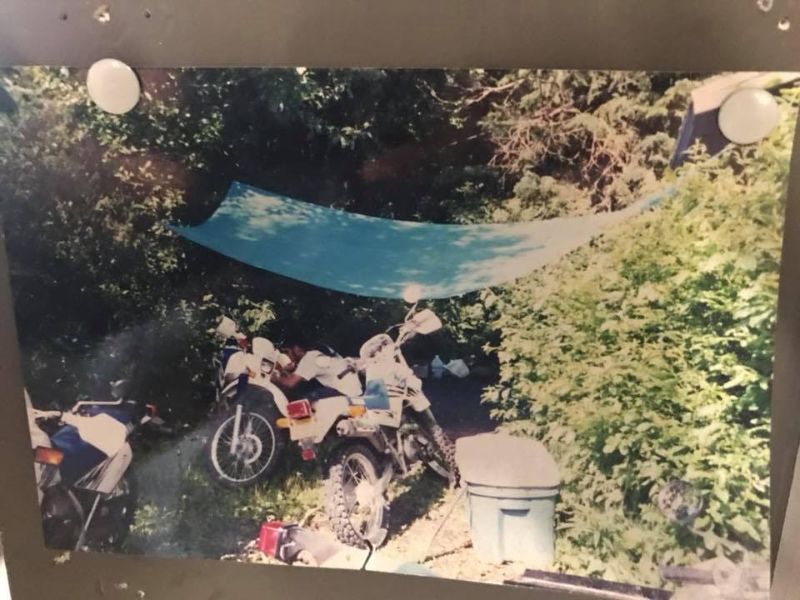 Over the next few years, the fleet would evolve to include four Yamaha XT 225s and one XT 350 to guide on, plus a trailer to haul a bike behind his Subaru. Several small groups of Japanese tourists would come to ride and camp as far north as the Arctic Circle. When the Japanese economy took a dive, the bikes sat still. 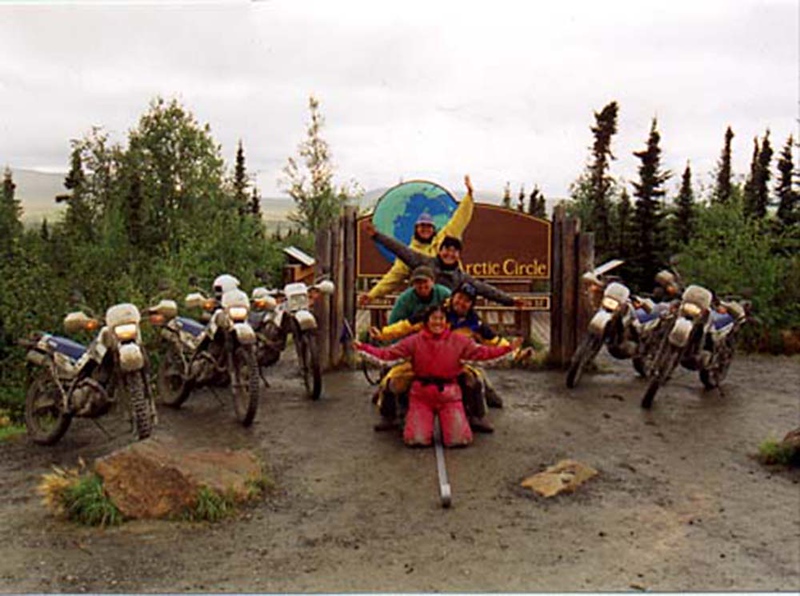 1999: First trip to the Arctic Circle

2000 – Phil receives his first inquiry from an American rider- and the only inquiry for the year- but they want a bigger motorcycle. Phil rents a motorcycle from another local company, hires a support car driver, and they run the tour. This was not proving to be a profitable venture, but it proved exciting enough that Phil would work other jobs all winter long during these early years to support the business.

The fleet would evolve again with the addition of a Kawasaki KLR650 and a pair of stock Suzuki DR650 motorcycles modified to suit his purposes. One of those Suzuki’s would come to earn the nickname “Caribou Killer.”  Phil eventually wrangled another small tour group consisting of a trio of American riders, including an enthusiastic investor who loved what Phil was doing, understood his determination, and wanted to make it grow. 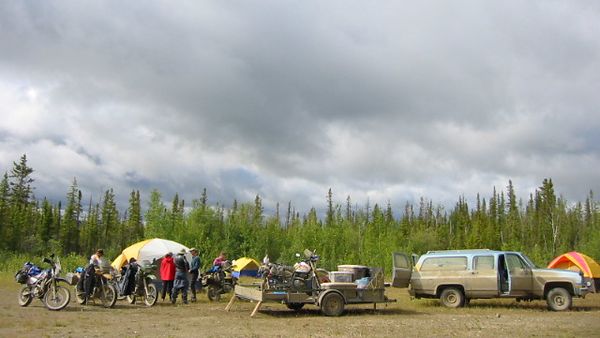 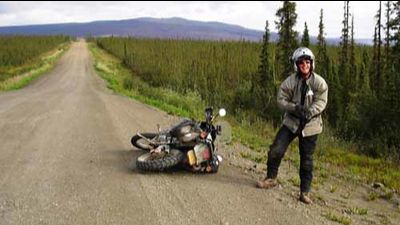 Phil prepping a KLR for a thorough skid plate inspection 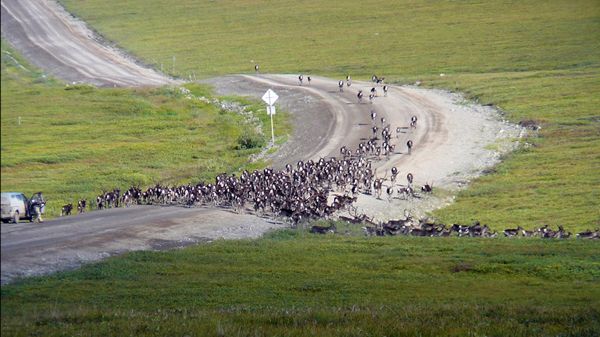 2004 – Now able to buy 10 KLR’s, a van and a trailer, Alaska Rider Tours moved into Anchorage at the current Spenard location which is very close to the international airport. This changed the whole game! People didn’t have to figure out how to get 40 miles out of town, turn down a dirt road, and look for the blue tarp.

“We did a good job of showing people Alaska, and they started asking us where else we go.”

2005 – Summers kept the team busy, but what about the winters? Thoughts turned to offering tours somewhere in the southern hemisphere while chilly weather was moving through the north. Since Phil spoke Spanish and Japanese, it made sense to bring Japanese and American riders to the lakes region of Northern Patagonia for his first international tour. 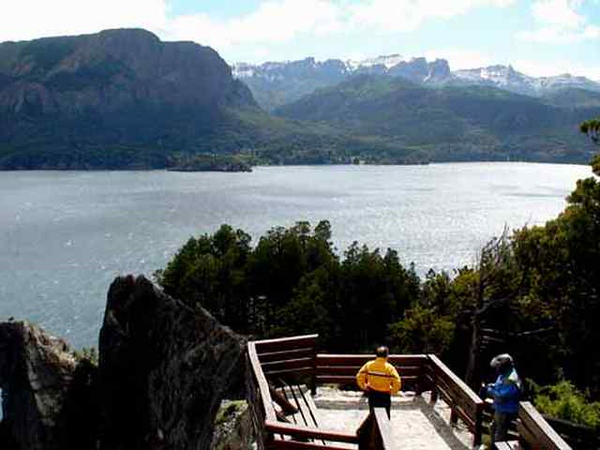 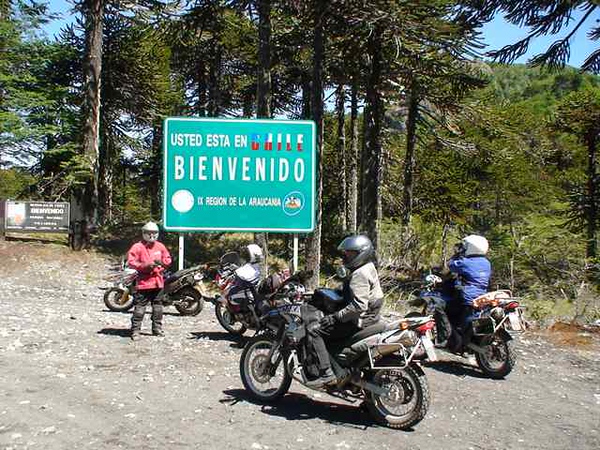 The riders were thrilled! They wanted more. Why not tour Japan? Phil could introduce American riders to that magical archipelago where Phil learned to ride. This is how the Japan Three Island tour and the Japan: Hokkaido Explore adventure were born. Tour offerings expanded further to Southeast Asia, United Kingdom, and Peru, with the vision of adding more. 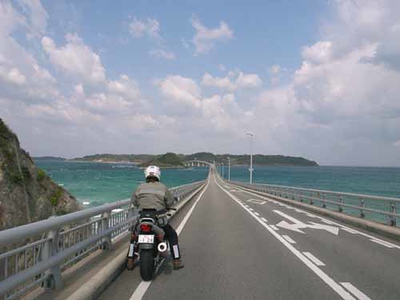 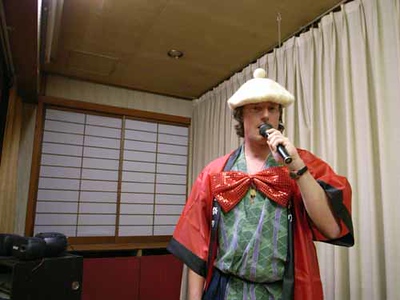 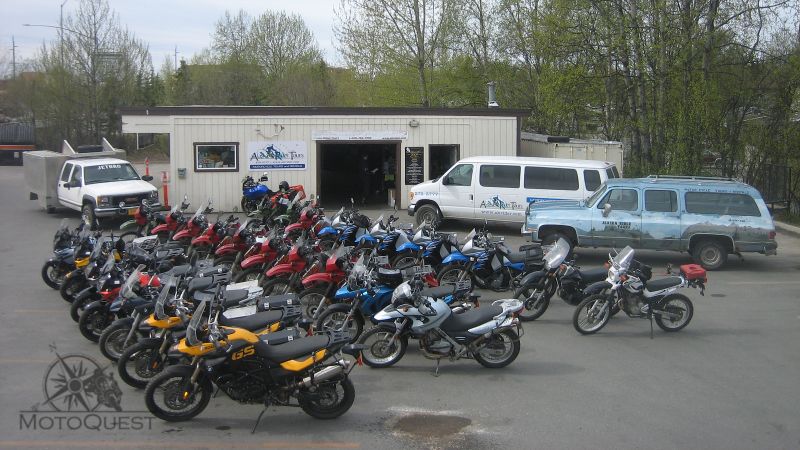 2007 –  Kevin Hagerty and Brenden Anders become part of the team. Phil was introduced to Kevin as a tour guest with several years of experience as an enduro racer and mechanic who was also an insurance industry aficionado. Brenden had responded to a help-wanted ad as a bike washer citing “hard work, low pay.” They eventually became managing partners, and collectively brought a skill set that gave the company the ability to move to the forefront of our industry. 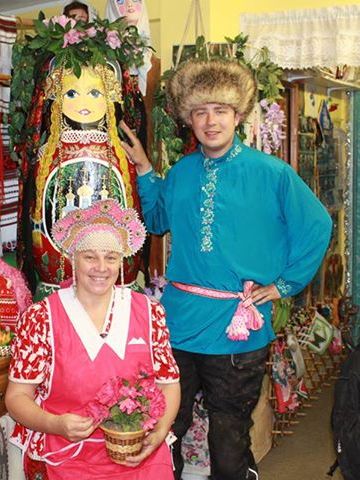 Brenden Anders and a new friend on the Kenai Peninsula. 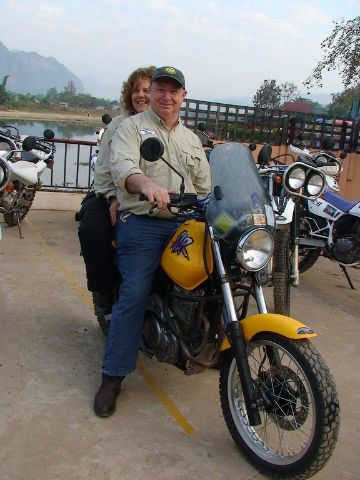 Kevin Hagerty and his bride on a tour in Southeast Asia.

2010 – Our first California location. Kevin Hagerty suggested the business migrate seasonally from Anchorage, Alaska in the summers to Long Beach, California in the winters. We moved into a space within the Long Beach BMW motorcycle shop’s storage building, and produced more domestic tour itineraries: American Southwest featuring Utah, Colorado, Arizona, and Nevada, and Wonders of the West which hit some of the best roads in Southern California and surrounding states. This location became a springboard for Baja in Mexico. 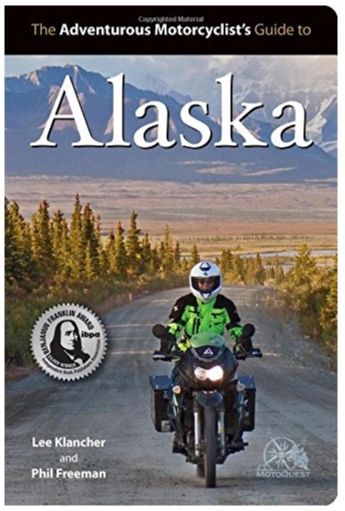 2012 – The Adventurous Motorcyclist’s Guide to Alaska developed from concept, to effort, to a real, tangible book. This collaboration of Lee Klancher’s publishing expertise and Phil Freeman’s intimate knowledge of Alaskan roads and trails is often considered the primary resource for many motorcyclists planning to ride the Last Frontier, and won a Benjamin Franklin Award within the travel category of the Independent Book Publishers Association in 2014.

2013 – Alaska Backcountry and Alaska Northern Lights itineraries are offered to adventurous riders who want to get away from the pavement.

2015 – The venerable KLR650 is phased out of the MotoQuest fleet in favor of the Suzuki DL650 V-Strom Adventure as our base model. While we loved the Kawasaki thumpers, after 15,000 miles under possibly not-so-gentle riders, they would spend more time in the garage being worked on than on the road. 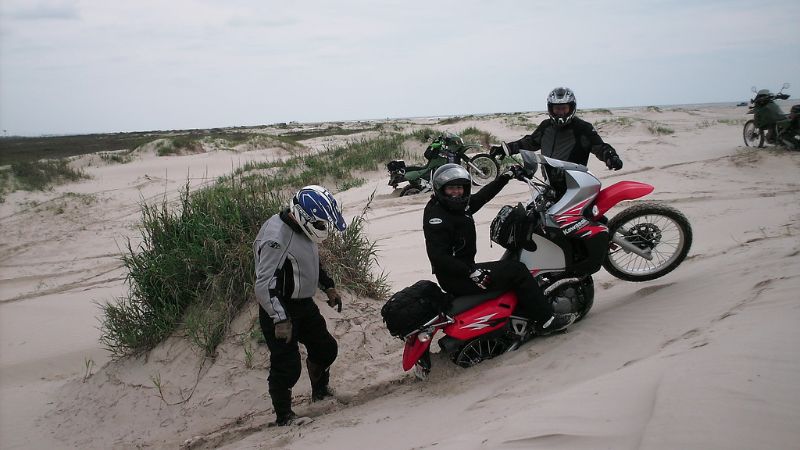 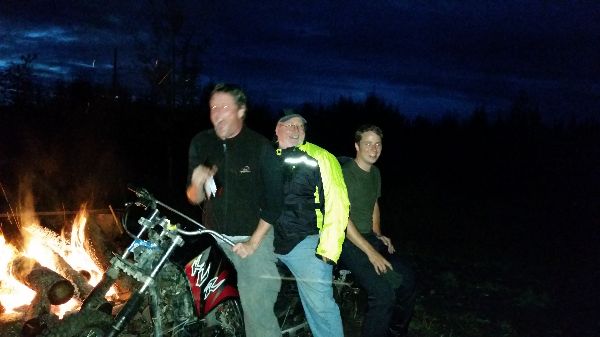 2015: Phil, Kevin, and Brenden say goodbye to the KLR650 models by sending this one, a franken-bike stripped for parts, into a funeral pyre.

2020 – MotoQuest has a fleet of nearly 100 motorcycles – mostly BMWs- and is presently offering brand new scouting trips through Mongolia, Canada, and Baja. Over the last decade, we have steadily expanded tour offerings to new international destinations (Japan continues to be our most popular), added rental facilities to better connect Long Beach to Anchorage, tested out various motorcycle models as rental options, and have continued to refine our catalogue based on experience. The MotoQuest team has grown along with our business, attracting riders who want to enable the motorcycle vacation addictions of travelers from around the world.

We are constantly humbled by the people we come into contact with: customers and colleagues, passersby at trade shows who stop at our booth to engage in conversation, presentation attendees, folks who have read about us and had to see our shop or wanted to meet Phil, and you, our newsletter reading enthusiast.

You are why we keep doing this and look forward to all the adventures to come! 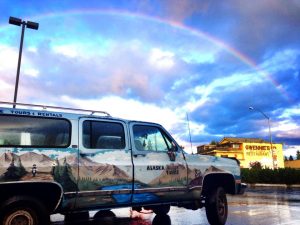