There’s something special about our Transporter deals. Maybe it’s the special reduced rental rates on a variety of ADV and Touring motorcycles. Or maybe it’s the opportunity to build your own motorcycle adventure between two of our locations. Have we mentioned that the scenery along the West Coast is absolutely stunning, and provides a perfect backdrop for a two-wheeled journey? Whatever the case may be, this is your chance to make a fantasy road trip come true!

We recently caught up with one of our Transporter customers to hear about his journey from Portland to Anchorage on one of our Honda Africa Twins.

How did your trip from Portland to Anchorage come about? Did you just reach out to MotoQuest to rent a bike and go? 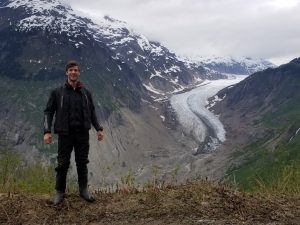 I had been toying with the idea of traveling to Alaska for some years, as it was one of the last states I had not yet visited. It remained mostly a daydream for quite some time, but in March 2018 several things happened that made the idea seem less far-fetched. For one, I found myself with more time, but the primary reason was that Robyn of MotoQuest had contacted me in January about their special “transporter deals,” where one can rent a bike from one city and ride it to another city at a discounted rental rate. This appealed to me, especially the discount part, and so I was faced with the decision to either lay down some money and reserve a bike… or pass. I genuinely almost passed; money was tight, things at work were busy, something might happen… a whole host of reasons. Ultimately, I had to force myself to click the “reserve” button, because I knew that, beyond all that immediate life bullshit, this was a journey that was going to be an important challenge for me.

From the get-go I had planned on going by myself; I wanted the time for reflection, and I wanted solitude. And for several weeks that plan remained unchanged until a friend learned of my trip during a conversation over tacos one night. He had wanted to do a trip when he first saw the MotoQuest transporter deals announced, but had completely forgotten about it. He asked if he could come with me, I said “Hmm…sure.”

And that was really that. Other than collecting various bits of gear that I would need, it was a matter of waiting and route planning. We really did just rent the bikes, plan a basic route, and go. 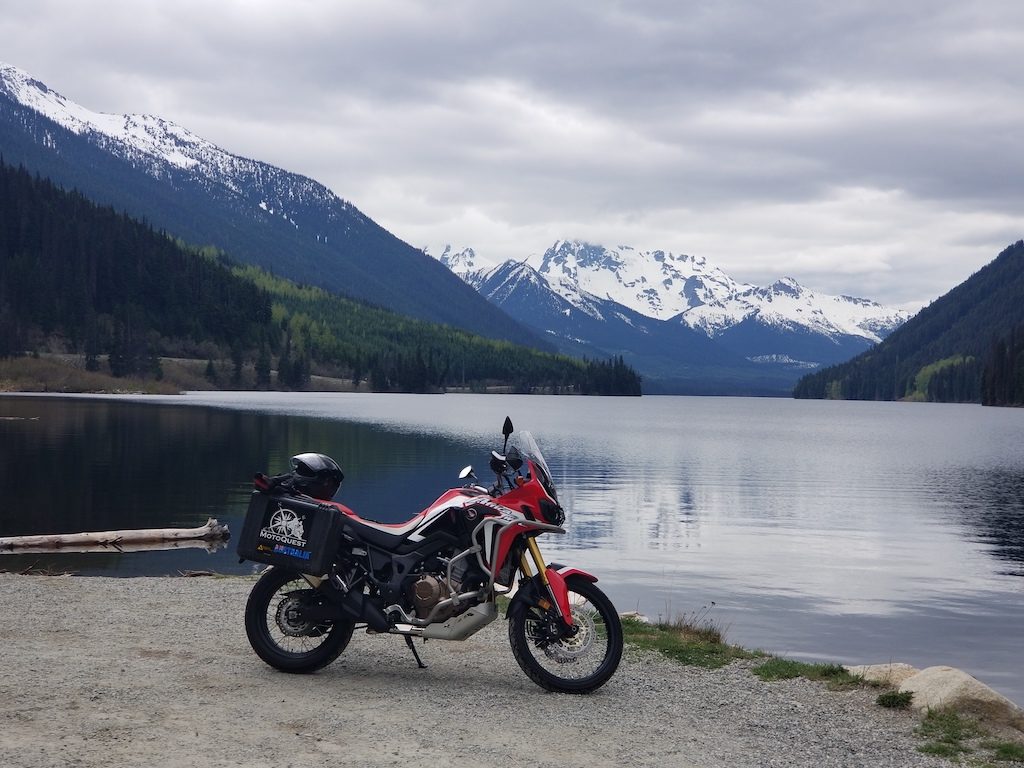 Did you get directions or route suggestions from MotoQuest?
Originally I plotted a rough route with google maps based on where I knew I was going (Portland, OR to Anchorage AK), what Robyn recommended I see in a brief conversation, and what I saw close to the main roads I’d be taking. I stuck with that route for several weeks, eventually going into MotoQuest Portland where Robyn sat down with James and myself and went through literally every detail of our route, down to the day. When I say every detail, I don’t mean an itinerary; our days were not packed, they were wide open. If we wanted to have a longer or shorter day, that was fine. If we wanted to see something else, that was fine. We basically knew where we were staying at night, where we planned to go the next day, and what we might want to check out on the way. “You’ll start there, and from there you can either ride this far and see this and then stay here, or ride further and stay here and make the next day shorter” — that kind of thing.

Suggestions from MotoQuest, and Robyn specifically, were numerous and incredibly accurate, and moreover allowed us to see things we would have otherwise passed by without knowing. But most importantly, they were not over-planned, and they were not complicated. We had time to do whatever we wanted during our days, which is what we wanted. 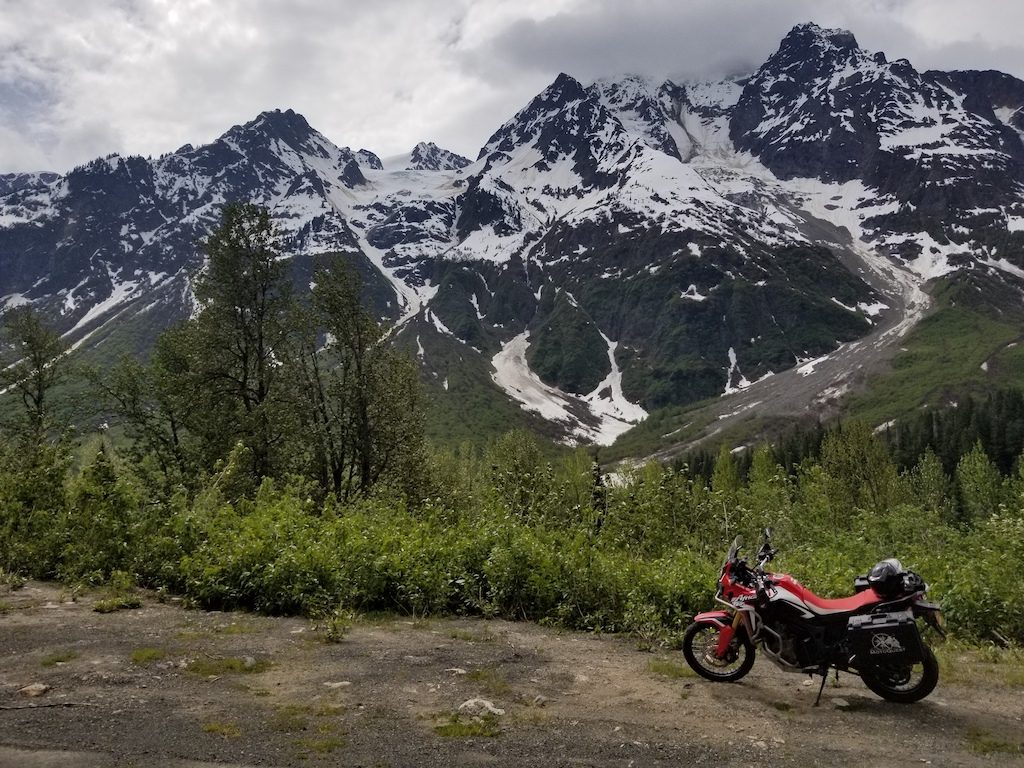 Did you camp or stay in hotels?
We originally planned to camp just about every other day, alternating with motel stays when we weren’t camping. However, certain health issues made that plan extraordinarily unattractive, so we only ended up camping once, at K’San campground in Hazelton, BC. It was a lovely place with an amazing view and a swollen, flooding river right next to it.

We didn’t pre-book any motels, at the suggestion of several friends who had made the trip before. They told us it wouldn’t be an issue finding a room, and to be honest I was skeptical. But I’ll be damned if they were right; we would roll into a tiny little ghost town in the middle of the Yukon, sometimes in the wee hours, and always find a room. Granted, sometimes that involved an awkward phone conversation with an extremely sleepy hotel manager, but hey, sometimes that’s just the way it is. 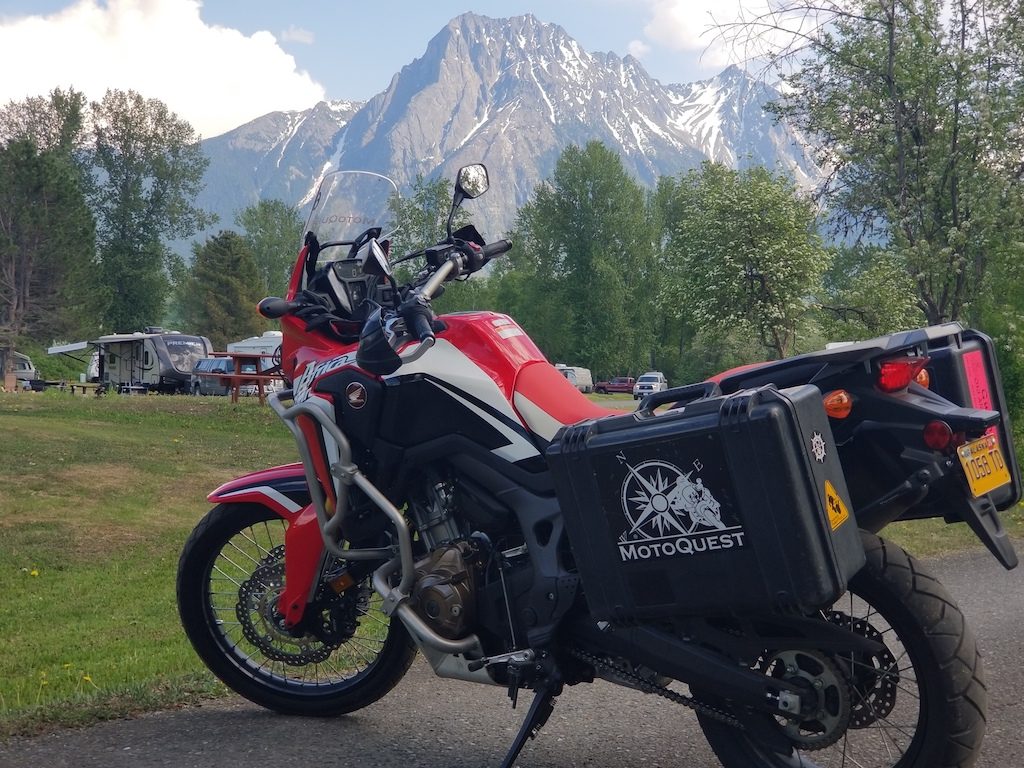 How long was the trip?
We were gone for 11 days total, but we made Anchorage on the 10th day and spent the 11th riding around the City and to the coast. 3,500 miles in total! 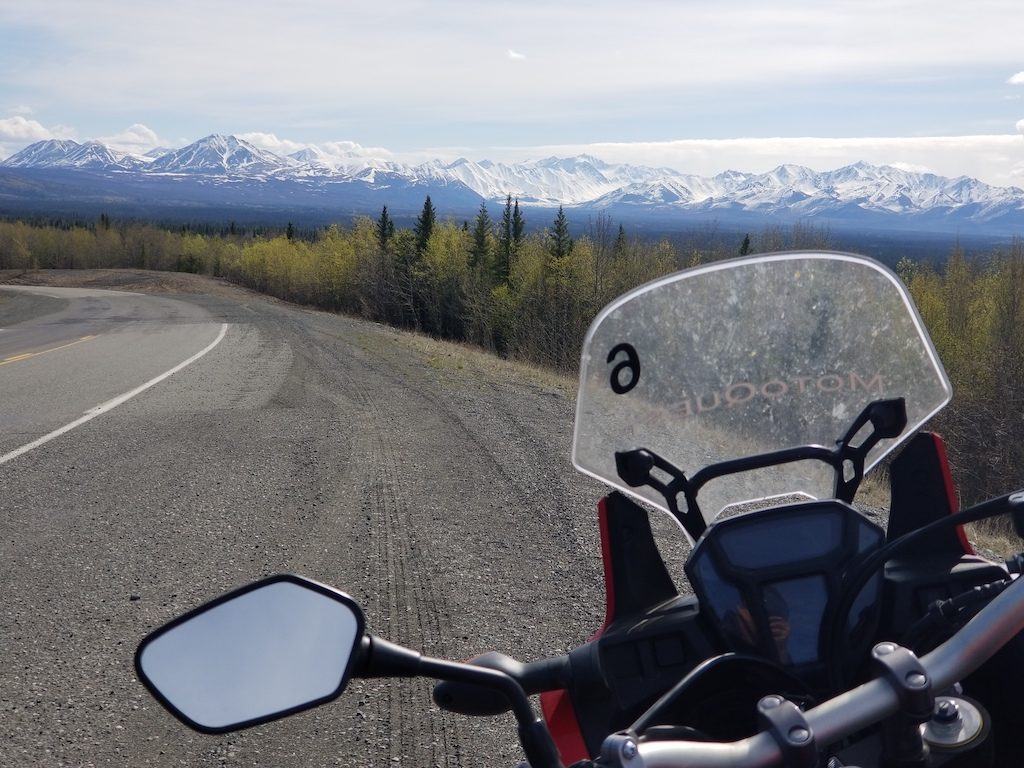 What was your favorite part of the trip, or favorite destination?
My favorite (and also the most challenging) part of the trip, for several reasons that all came to a head at once, was getting off the ferry from Skagway to Haines and then riding from Haines to Haines Junction well past midnight. After a half day of waiting and riding, we arrived late to our destination port at Haines and still had to ride another 140 miles at 11:30pm through cold grassy tundra surrounded by towering snow-covered peaks to Haines Junction. That whole final leg of the day happened during twilight, even though it was 11:30pm – 1:30am. The sky was just lit enough to be dark blue, definitely not dark, and the whole world felt like it was sleeping. The whole setting reminded me of scenes from my favorite movie, Never Cry Wolf, where a biologist follows a pack of wolves to learn about their behavior (this movie, fittingly, was largely filmed in British Columbia). 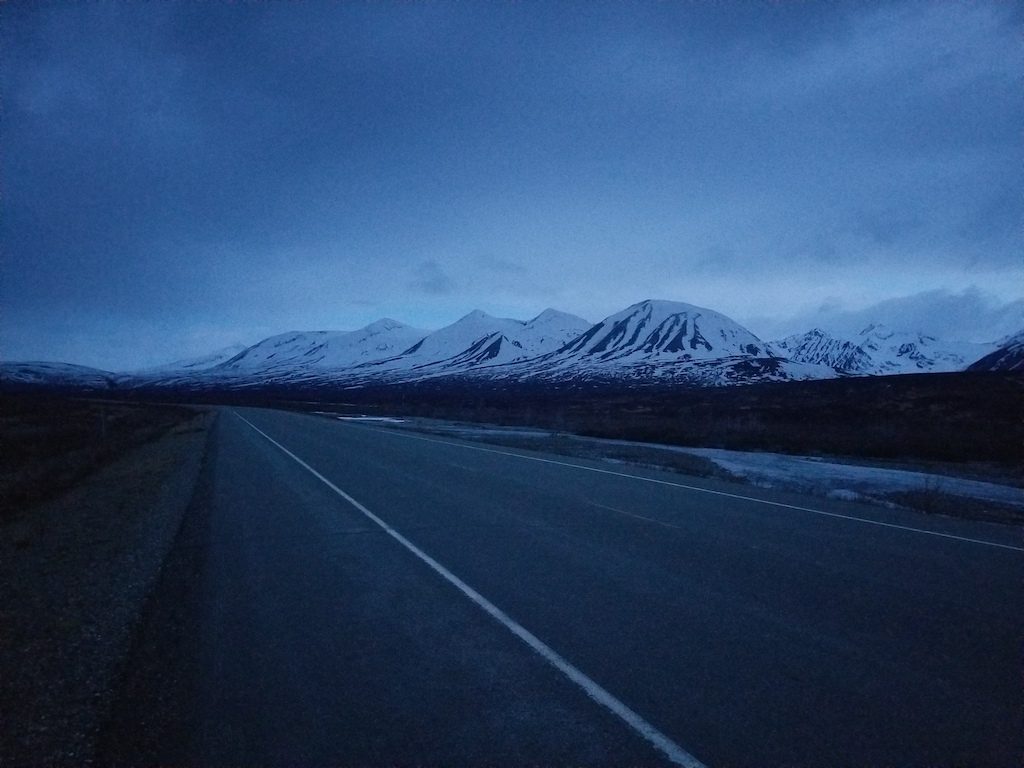 I was at the height of my physical pain, and for me at least, this place represented the height of natural beauty that we would encounter during our journey. We were way behind schedule, the hour was past midnight, we had no idea if any motels would be open, and we were getting dangerously cold and tired. But this all added to the adventure because we had no choice other than to keep pushing forward until we got to Haines Junction. Couple this with the fact that you would look out past your windscreen, and all around you see an inky blue sky, silhouettes of the peaks around you, and small white birds flitting across the road and only visible when in front of your headlights as they flew past you, disturbed from their nests. There were no buildings, no houses, no power lines, not even any other roads, for over 100 miles. At one point we pulled over to plug in our heated gear and take it all in. The stop lasted longer than we intended, and it was a very, very special moment. 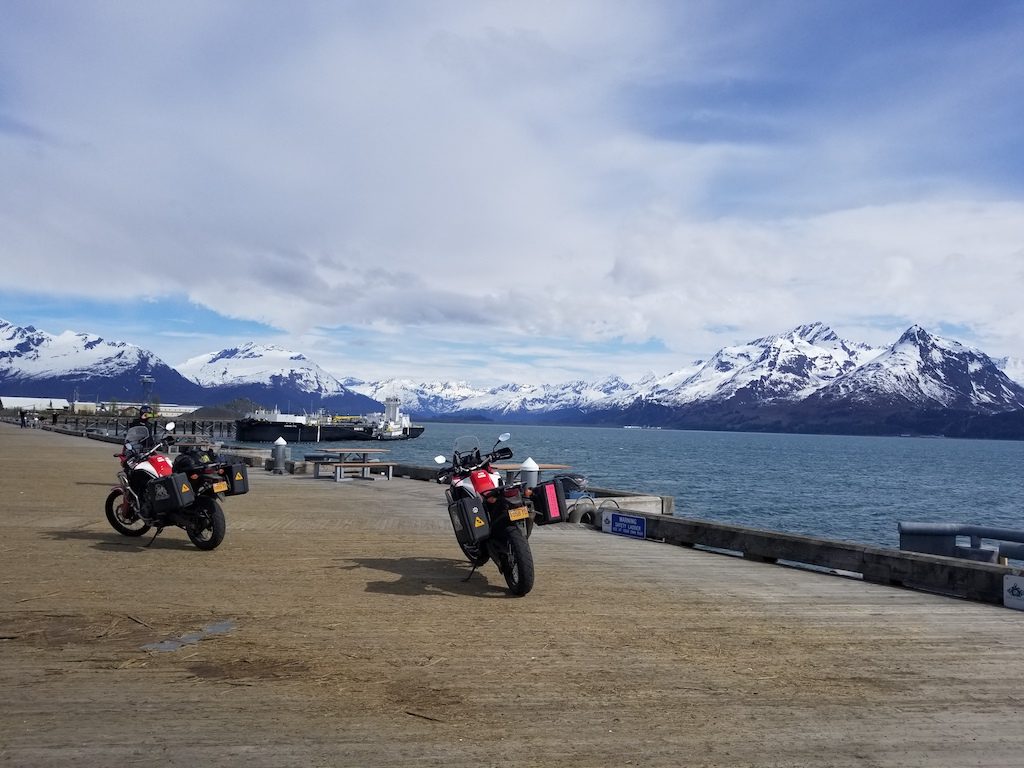