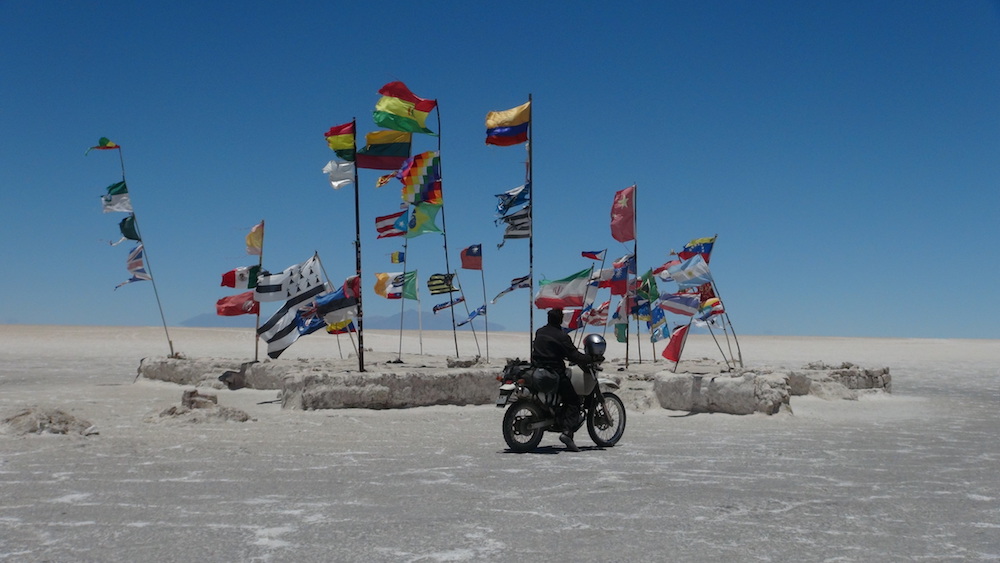 This is the 3rd installation of Phil’s trip diary. Catch up now:

Go learn more about our Bolivia Road of Death Adventure

We didn’t have a long day but we made it adventuresome nonetheless. On the way out of town the “buddy system” broke down with the last part of the group missing a turn and going into uncharted parts of the city. After going down a one-way street, I clipped to the lead and, with the aid of the GPS, patience and laughter, we all made it back on track. Our “city tour” of Sucre was exhilarating to say the least. 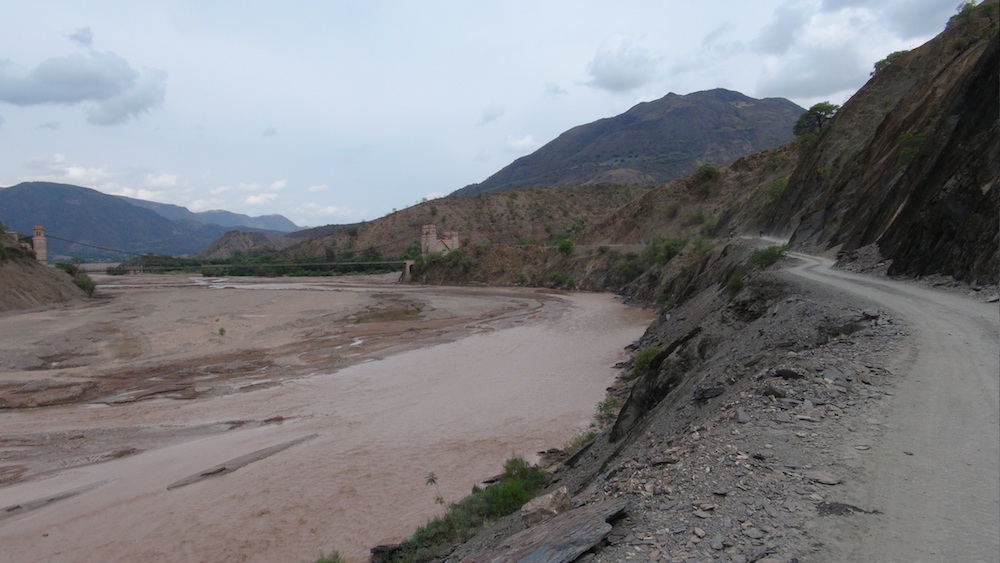 Once caught up with the group at the gas station, Mike had another flat tire. There always seems to be one guy that suffers all the bike maladies, and this time it was Mike. Until now, he’s had an engine seal fail and two flat tires.

The paved road to Potosi was easy riding. As we climbed, the landscape seemed to flatten out and grow drier. When we arrived at our destination, the GPS read 13,000 feet. You could really feel it, and some of the group were beginning to feel symptoms of the altitude with mild headaches and dizziness. 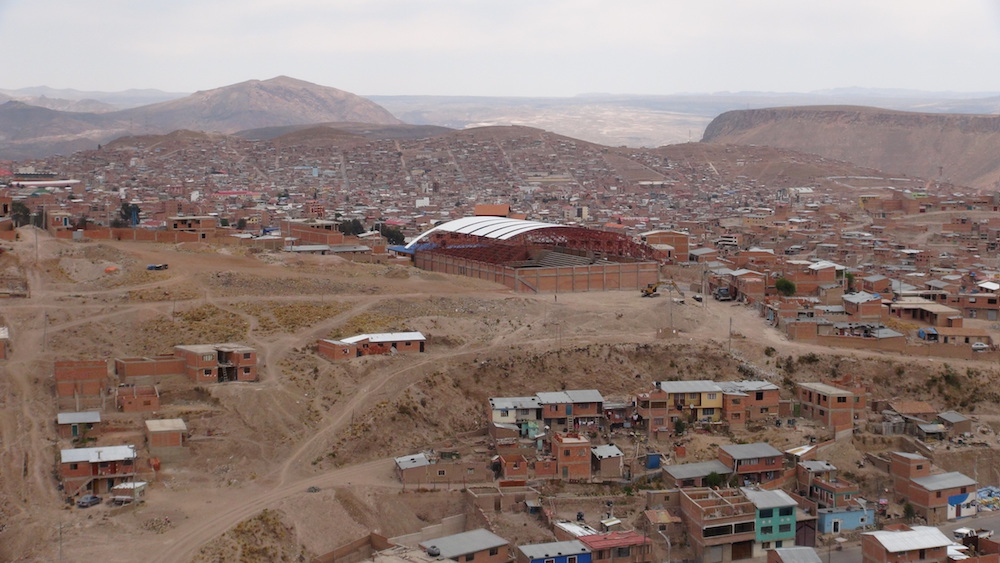 After lunch, the group split up to explore different aspects of this historic city. At one time, this was the richest and largest city on the planet. The silver deposit was so large that it funded the entire Spanish Empire. They say there was so much silver in Cerro Rico that you could build a bridge across the Atlantic to Spain with it.

I joined a small group to check out the Mint where the Spanish, since the year 1572, made coins for Bolivia and other colonies of South America. We followed a guide around for an hour and a half and the most extraordinary part of the tour was the enormous wooden machine brought over from Spain that flattened the silver so it could be punched into coins. It was donkey-driven and took up an entire two floors of the building. The intricacy of this device was unbelievable. 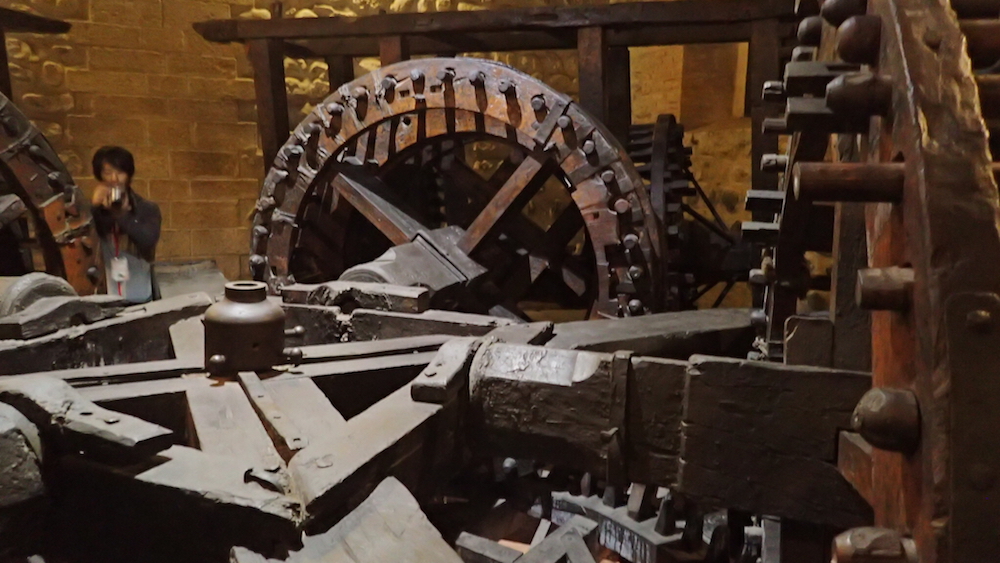 Another part of the group took a tour of the mine. From the pictures and stories, it seemed like it was on the dangerous side, as they were nearby dynamite blasts and had to crawl, scale and duck all the way through the mine. It was one of those experiences, they said, that they were glad they did but they would not do again. The miners, when starting out, only made 150 Bolivianos a day, equivalent to $20 USD. The life expectancy of the miners was not long…

The altitude was really a factor by this time and some of the riders opted to just take it easy and rest.

The paved ride straight from Potosi to Uyuni would take us just three hours, so Cory had a treat for us. One year, his group was forced off the main highway between the two towns, so he found this back road route. Lucky for us, as it was a sheer delight. 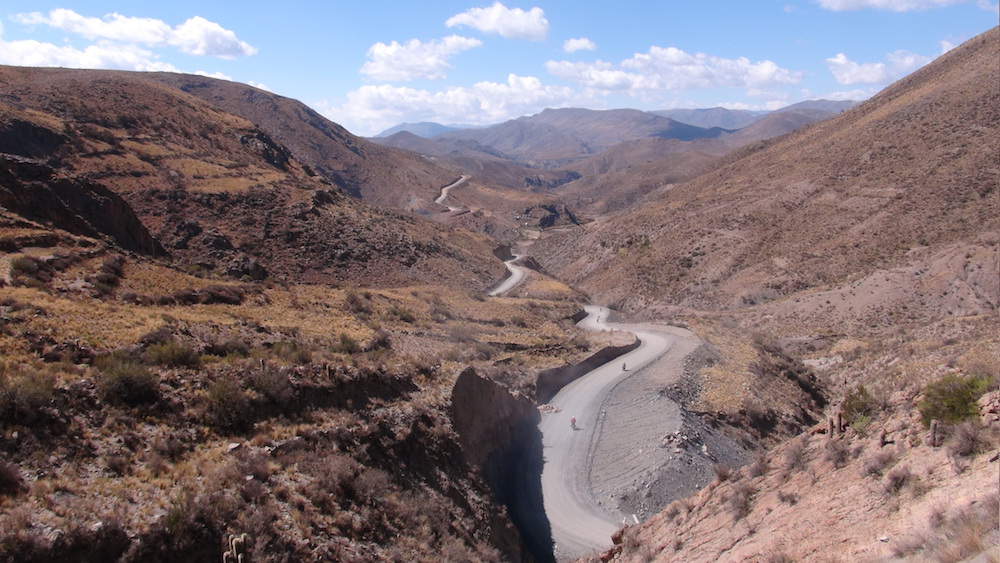 Just a couple kilometers out to Potosi, he veered south onto a dirt road and followed it for about 15 minutes before taking a small detour. At first, I thought it must have been a mistake since it entered a small pastoral town and crossed a shallow stream. Then,  the trail turned even more rustic and it climbed in a series of switchbacks. 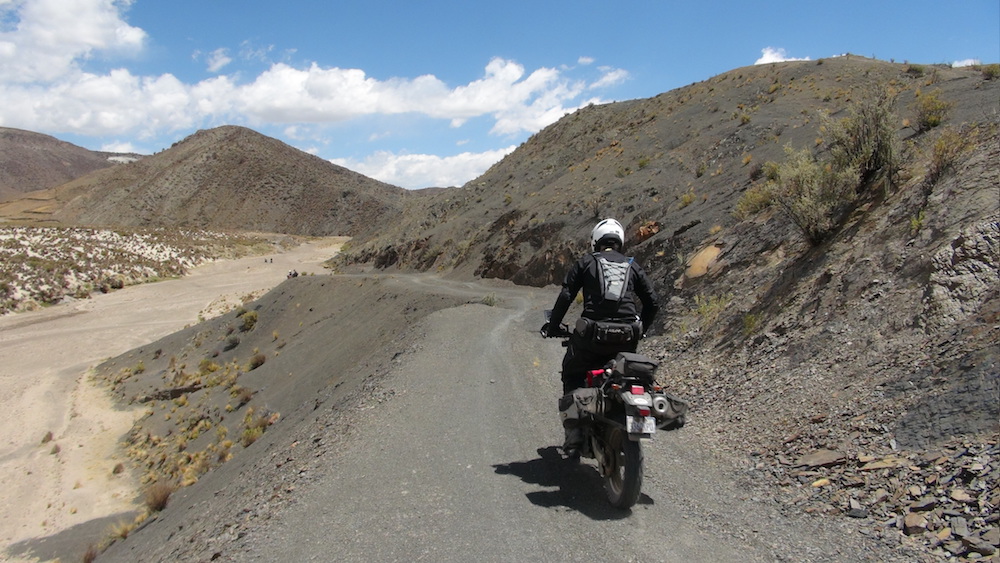 Loose rocks, ruts and whoop-de-does challenged us as we climbed and climbed. There were no tire tracks on the trail. We gathered at the top of the valley and took in a fantastic panorama complete with cactus, a small village and a small stream, meandering through the arid countryside far below. With all the engines off, it was quiet and serene. 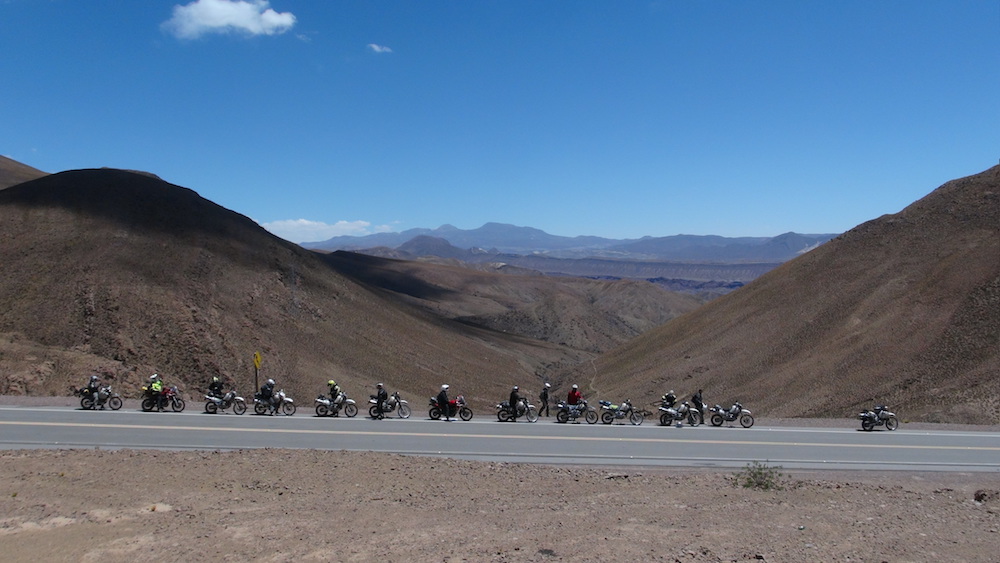 I was not expecting such a technical off road ride, especially at 13,000 feet, but everyone was up for the challenge. The rest of the back route supplied more amazing views of open, arid landscape. Small oases of green were always crowded with alpacas grazing. Small towns, so desolate and lonely, went by. Prominent rock formations burst out on both sides of the track, reminding me of the American Southwest. When we finally touched pavement, we could truly say we had experienced the real Bolivia. 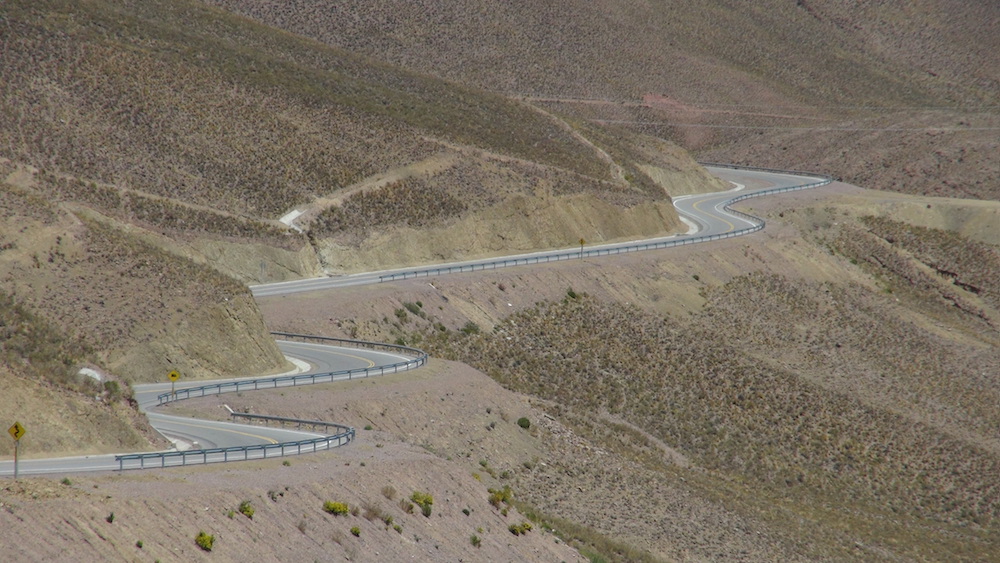 The last part of the trip that day was all clean, open pavement with no traffic. We clipped along at 12 – 13,000 feet. The road surface was European-grade and a real surprise. Was I really in Bolivia? At one point, it descended in a long straight away and continued through a flat valley. On one side, green meadows stretched out for miles dotted with thousands of Alpacas. It was a scene that reminded me of pictures of the Serengeti. What a wonderful sight! 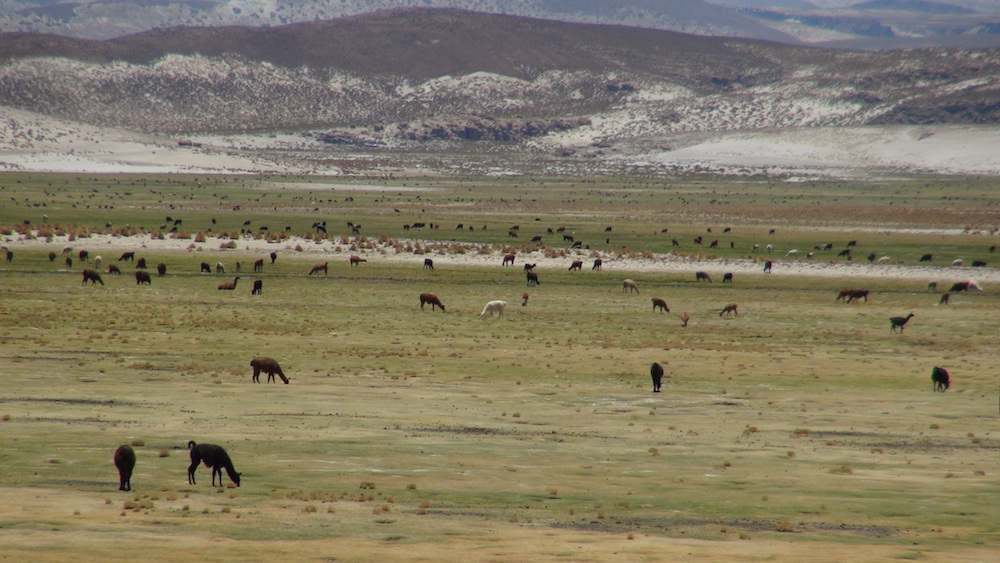 We came over the last ridge of before arriving at the dusty town of Uyuni. The town looked like something out of Star Wars. It was just a cluster of earth-brick buildings huddled together in a vast dry plain. Beyond it lie the salt flats: a dazzling, shimmering mirage of a spectacle that did not seem to connect to anything I had ever seen before. Mountains erupted from it in a dreamlike fashion, the bases of them blurred by heat, light and distance. 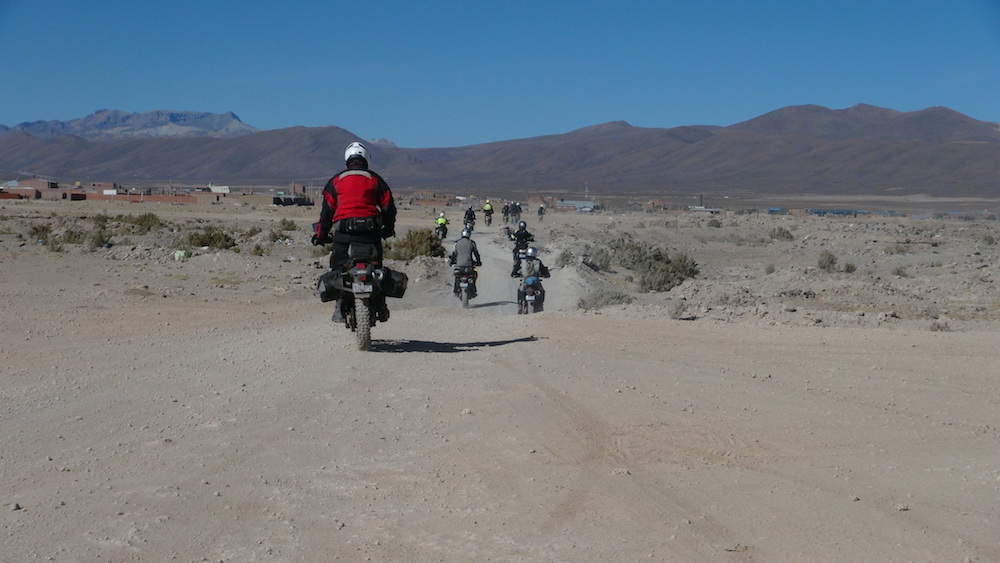 When we entered the town, you got the sense right away that it was an outpost. It was severely unkempt, dusty and rundown. We passed straight through the town to the far side, in search of the train cemetery. We rode through a myriad of plastic trash bags, clinging to scrub brush and fluttering in the wind. A waft of putrid hit us like a wall and I turned to see dozens of cow skulls, decaying out in the open dust and dirt. 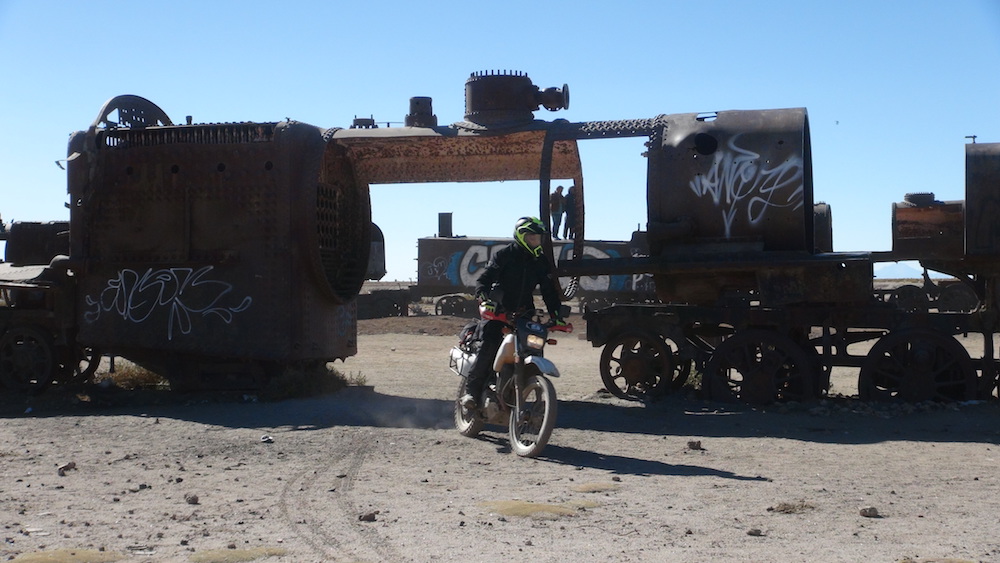 We arrived at the cemetery, a huge collection of abandoned trains strung out and forgotten in the middle of a flat, dry nowhere. Uyuni used to be the hub of commerce, the railway vein connecting the surrounding mines to the sea. It used to be one of the most important towns in all of Bolivia. Now, it seems, in a way, forgotten. 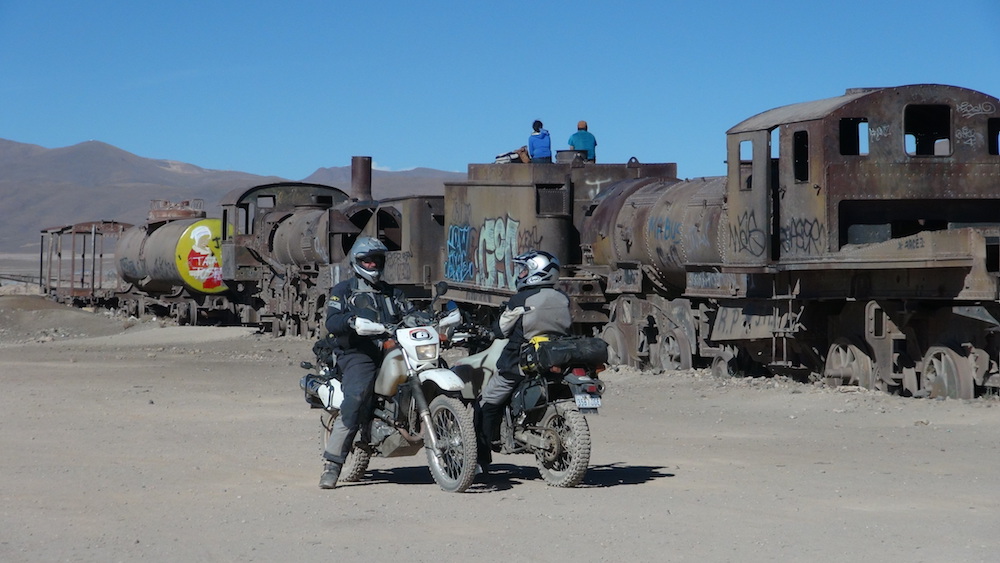 But not at night! We walked to dinner and the town seemed to come alive as we passed open shops, restaurants and pedestrians. It is a dusty crossroads in the heart of a vast, empty landscape. Nostalgia seemed to be its largest export.

We debated to do a 74-mile dusty blast south to the place where Butch Cassidy and the Sundance Kid met their end, but instead opted to spend a day out on the largest salt deposit on the planet. After the day was over, we all agreed: it was one of the best motorcycle experiences in our lives! 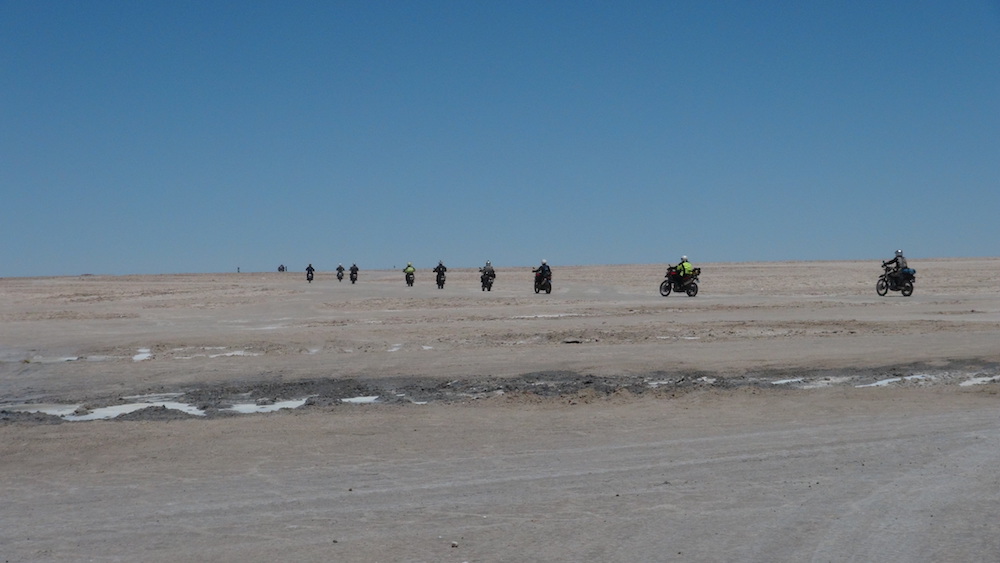 We started our day trading one dusty outpost for another as we headed north to the small town Colchani, and the jumping off point of the famed Salar Uyuni salt flats. At 12,000 feet, this enormous salt flat used to be a sea and now is a place where two dimensions collide and perception becomes distorted, if not clearer. Cory gave us two rules: do not get out of sight of the group, and do not go through water. 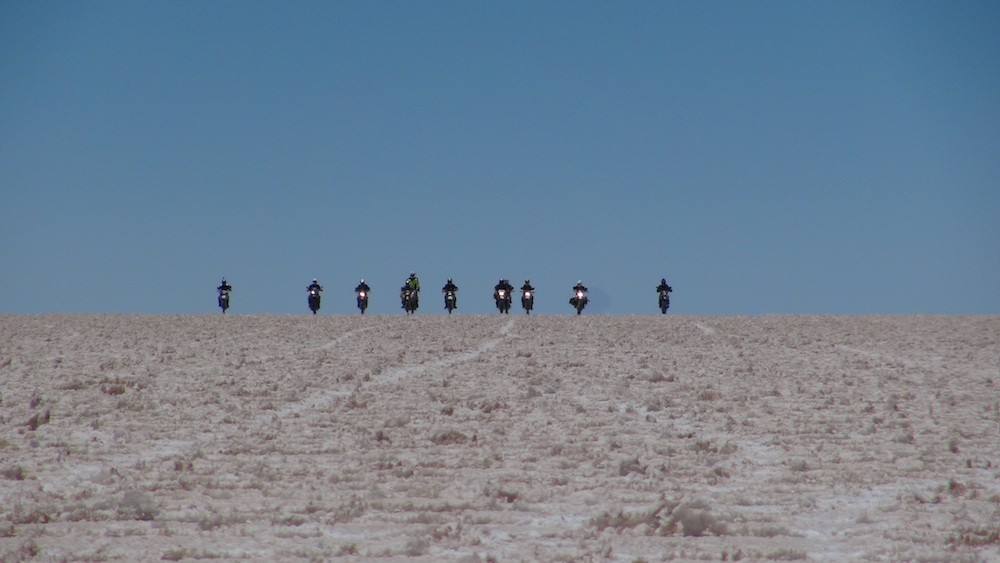 So, as he lead us out onto the flats, we spread out, and as a group of fighter planes in formations, we swept over the salt. It was a sensation of which I have never experienced on a motorcycle. We were riding as a group, and picking our own paths. The freedom of this was almost inexplicable. All you could do as a rider was look out at the rest of the band and smile…we were all riding as individuals, but when you pulled back to look at the group as a whole, we were as one. 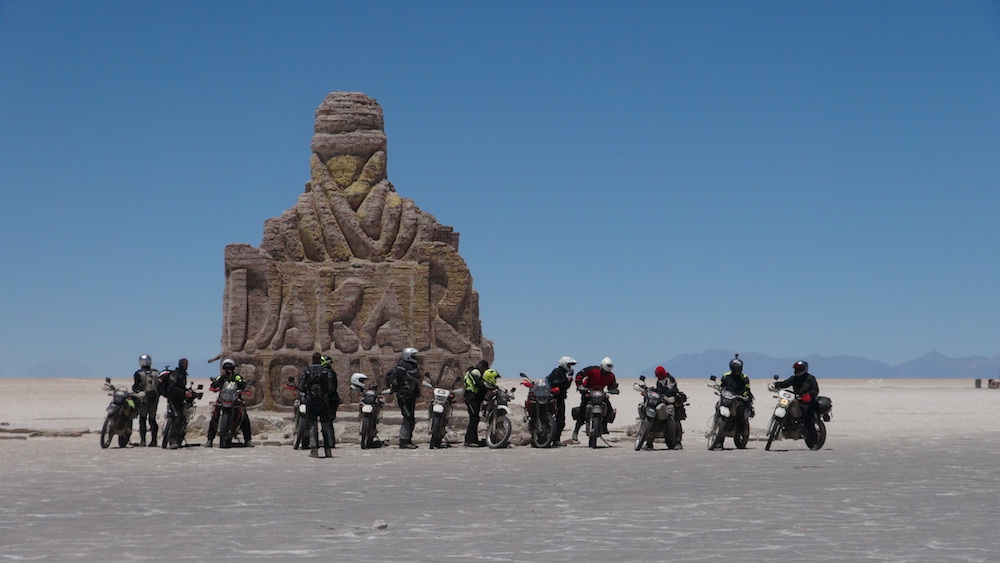 After a photo op at a Dakar Rally salt statue (the Dakar came through here in 2014 and would be back next February), we sped across the flat for a time before stopping in the middle of it to just take it in. Some riders played with the perception and took pictures that appeared to show you holding a bike on the palm of your hand, or a group standing on the seat of one motorcycle. 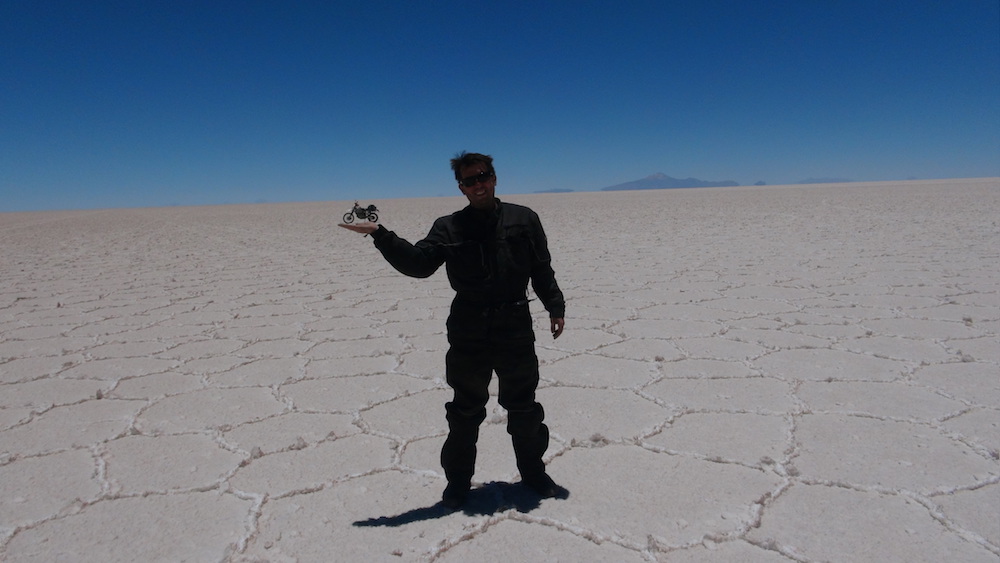 Cory had a drone and took some video of the group riding across the flats. The ground was a series of round, crusty salt deposits that stitched together in a salt carpet that was the expanse of some small countries. Mountains could be seen shimmering around us in the distance and some of the horizon was just bright white touching the piercing blue of the sky. 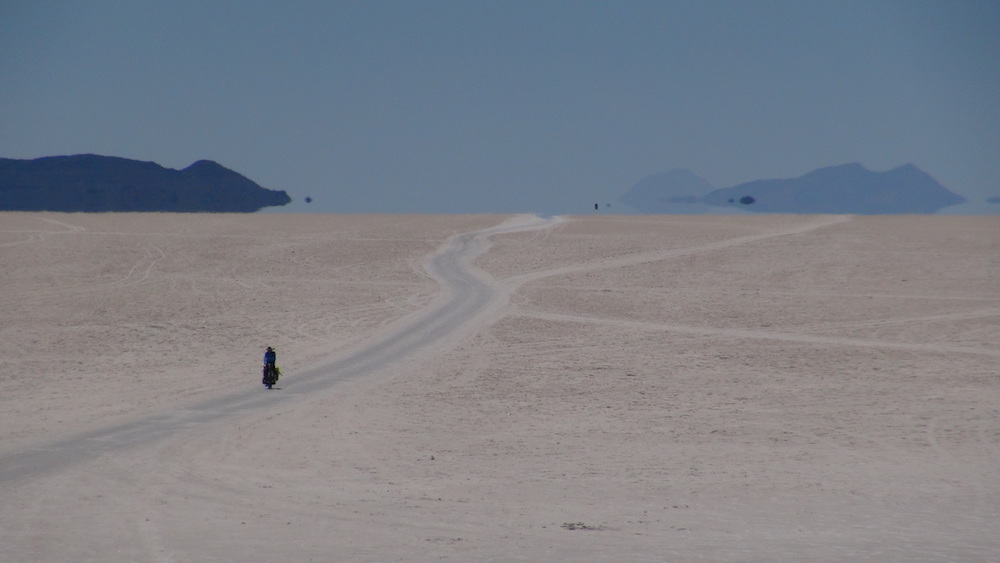 We then sped off across the flats to the island of Incahuasi, where there was a small restaurant. The island was an anomaly, covered with cactus, alone in the white flat world. Along its “shores” could be seen remnants of choral. To wrap your mind around the time and elements nature had invested to make this happen was a struggle. We ate a delicious lunch there at 12,000 feet and took in the cactus, tourists, outlandish white horizon. After which, we sped back to the edge of the salt towards our hotel. 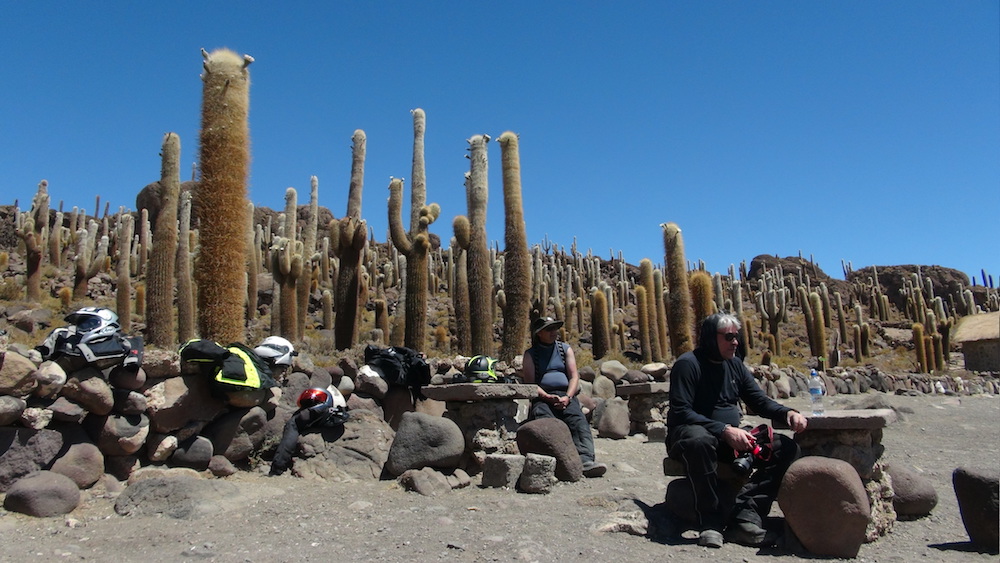 During that retreat, again, we elevated to the heightened sensation of flying in formation. Riding with fellow motorcycle travelers, in this far away place with the freedom to set your own pace and position, with the sun at our back…was one of the best motorcycle experiences of my life. 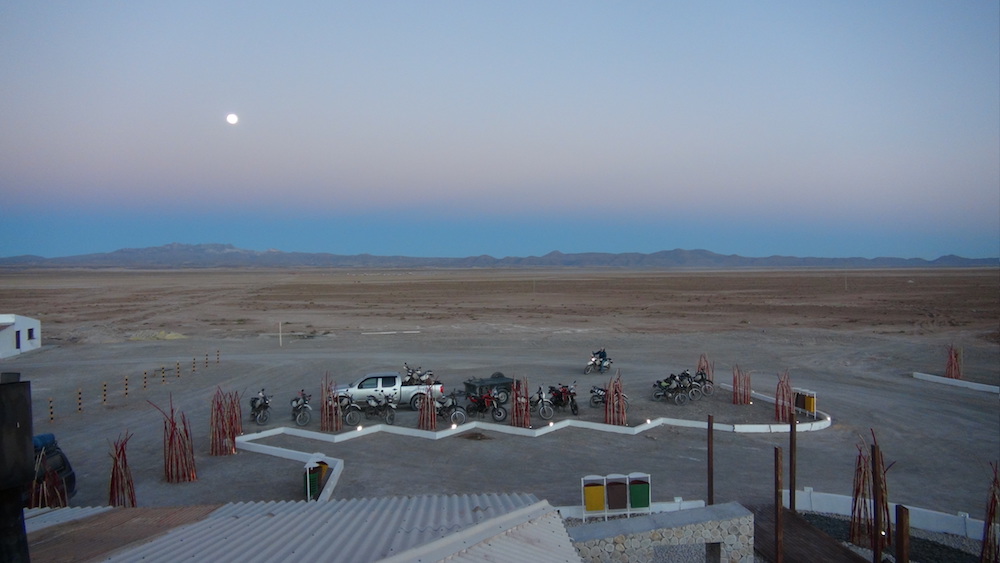 Our hotel that evening, from the outside, looked like something that Luke Skywalker would live in on a desert moon. On the inside, well-crafted wood floors, chandeliers, and clean, comfortable rooms greeted us. It was a hotel made of salt, and as we watched the sun set and the rise of the full moon, there at the top of the world, we all agreed: Salar Uyuni is one of the most exceptional experiences we have ever had.

Cory warned us that this might be the most boring of days during our ride. We were in the Altiplano plateau and had to make distance before we dropped off the Andes to the Amazon side. There was only one main road to get to where we had to go.

The paved highway was mostly straight, flat and without traffic. It did, however, have its precious aspects. Most of the landscape was arid. There was some farming going on, and the far sides of the broad flat landscape were rimmed with low hills. We were at 12,000 feet throughout the day. Llamas, flamingos and small, run-down villages went by. Sometimes you could see up to a dozen dust devils whirling about in one panorama. We kept up a fast pace on the smooth pavement through the morning and after lunch. We arrived at our destination of Oruro around 3 in the afternoon. 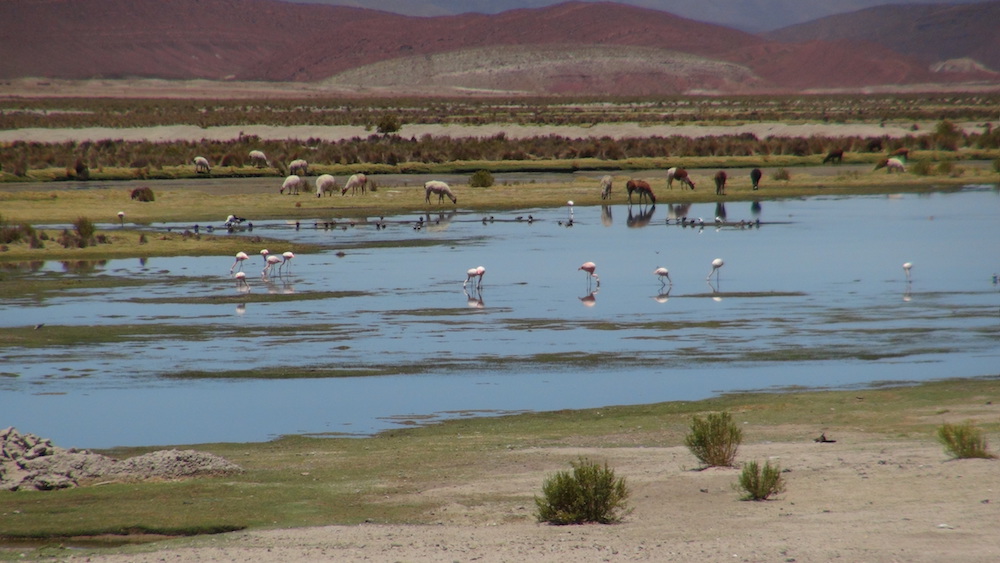 Oruro is known to be the most “Bolivian” of its cities. The economy is based on the massive tin mine located just behind the city. It is about 90% indigenous and the downtown is crowded, dusty and noisy. But, the magic happens when you walk the streets and relax in the parks.

Before dinner we strolled around, taking in this busy city and its markets.

Go learn more about our Bolivia Road of Death Adventure