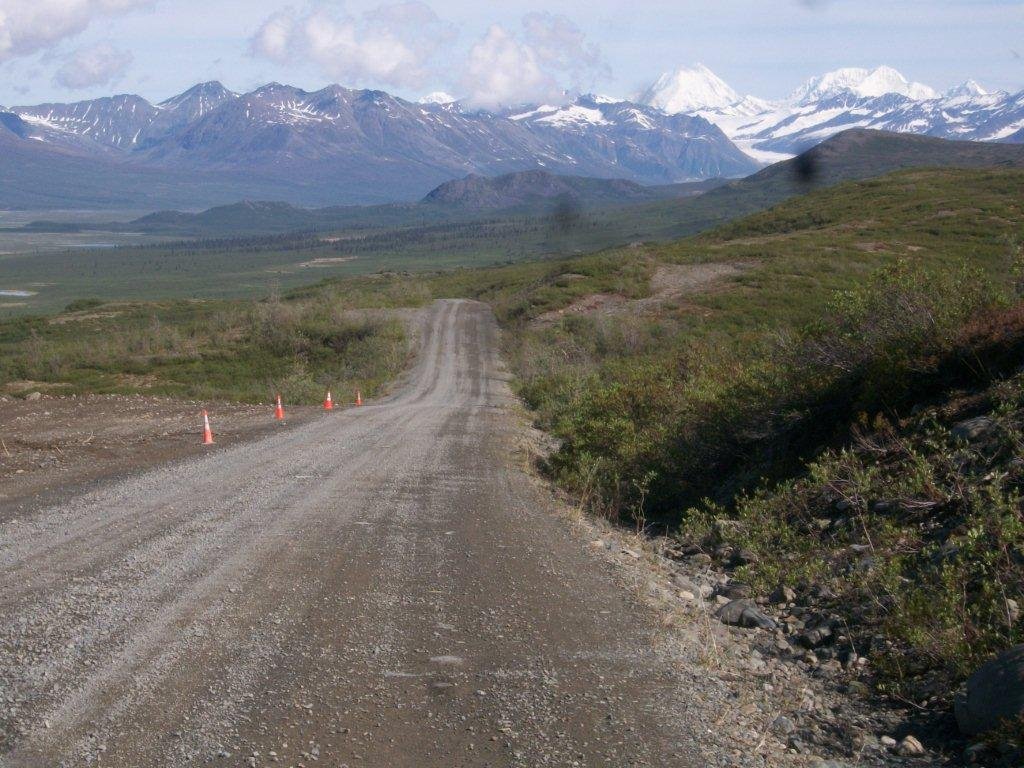 This image shows a representative scene repeated often throughout the ride along the Denali Highway… a look at twelve to fourteen thousand foot peaks of the east to west running Alaska Range. In geo plate tectonic language, the Alaska Range is an extension of California’s Sierra Range, and Washington’s and Oregon’s Cascade Range. Note the glacier in the distance, partially obstructed by the mountain in the foreground.

The Denali Highway is a perfect road for the adventure motorcyclist. It’s dirt, but well maintained. Still, there is not a lot of traffic on the road. Vistas, fishing streams, wildlife… Alaska in your face.

Why, then, is Denali National Park, a “national park?” The mountain. Mt. McKinley, the North American continent’s highest peak. Mount McKinley has a larger bulk and rise than Mt. Everest although the summit of Everest is higher at 29,029 feet (8,848 m). Everest’s base sits on the Tibetan Plateau at about 17,000 feet, giving it a real vertical rise of a little more than 12,000 feet. The base of Mount McKinley is roughly at 2,000-foot elevation, giving it an actual rise of 18,000 feet.

Interestingly, the best vistas of McKinley accessible to the road traveler are from the south, outside of the national park. If you want to get close to see the mountain, or if you are a mountain climber and need to reach the base of the mountain, you must hire a bush pilot in Talkeetna, to the south east, to fly you there.

There is an excellent book store at the Denali National Park visitors center, where I purchased a copy of Jack London’s “The Call of the Wild.”

During summer, because of weather, Mt. McKinley is visible only one third of the time. On a good day, one can see McKinley when riding west along the Denali Highway. Riding north from Anchorage on the Parks Highway in the rain eight days ago, we missed an opportunity to see McKinley. While it wasn’t raining today, the clouds. nonetheless, obstructed a view of the mountain from the Denali Highway. We would have one more shot, tomorrow, riding back to Anchorage on the Parks Highway, to see McKinley. I thought to myself that it would be a pity to come all the way to Denali National Park and not be able to see its central attraction, Mt. McKinley. Two out of three opportunities to see Mt. McKinley had now been missed.

Yesterday, near North Pole, I stopped at a road turnout overlooking the Tanana River… one of those rivers that no one has ever heard of but, which, still carries over five times the volume of the Colorado or the Arkansas. A motorcyclist riding a Harley Davidson had also stopped and we began a conversation. The fellow told me he was from Colorado and that he and a friend had come to climb “Denali.” They climbed to the 15 thousand foot level when his friend became sick and they had to terminate their climb.

I asked the fellow if he and his friend were experienced climbers and he said they were (stupid question to ask, in hindsight). He said he didn’t want to waste his passage to Alaska so he sent his friend home, rented a Harley and was spending the week riding.

It didn’t register with me until later that he said, “climb Denali.” I thought the name of the mountain was McKinley. My confused state was resolved when I read a story board at the Denali National Park visitors center about the controversy.

Denali is an Indian name. Local initiatives, including a resolution by the Alaska State Legislature, have attempted to affect a name change of the mountain from McKinley to Denali. But, the mountain is in a national park… on Federal land. So, it takes an act of Congress to change the name. Congress approved the name “McKinley” for the mountain in 1897, when William McKinley was yet a presidential candidate. Tradition has dictated that the congressman from McKinley’s district in Ohio put a hold on any legislation to change the mountain’s name. That tradition continues to be upheld and there does not appear to be any likelihood that Mt. McKinley’s name will be changed any time soon.

But, considering the comment of the climber/motorcyclist that I met at the Tanana River turnout yesterday, some people call the mountain Denali, notwithstanding its official name.

Above: Glacier in the Alaska Range. Along the Denali Highway.

Above: Mike, in front of his BMW R1200 GS adventure bike, at a lodge along the Denali Highway. Mike, a solo motorcycle adventurer, had ridden to this point from his home in Sacramento, CA, where he was employed as a California State Trooper. After riding the Denali Highway, Mike said he was headed to Deadhorse.

Curious about the impact of California’s financial situation on “CHIPs,” I asked Mike about it. He said CHIPs was being hit hard by California’s budget problems Mike reported that he has one trooper buddy, who like him, is a motorcycle cop. The buddy’s BMW police motorcycle is currently disabled and in need of repair, but, there is no money, according to Mike, to affect the repair. So the buddy is doing desk work.

Above: Jim, with Nicole as a spotter, fishes for grayling at Coldwater Creek on the Denali Highway.

Above: Bridge on the Denali Highway crossing the Susitna River… another of Alaska’s humongous, ubiquitous rivers. The Susitna flows into Cook Inlet, near Anchorage, and, like the Tanana, a tributary of the Yukon, carries five times the volume of the Colorado River… and about half the volume of the Yukon River. Pat had arrived at this spot first among our tour group and reported spooking a group of caribou who swam across the river.

Above: Bar scene in Carlo, Alaska, ten miles south of main gate Denali National Park on the Parks Highway. Our group stayed in some cabins nearby and some of us came to the bar to catch the second half of the Lakers/Celtics NBA basketball championship series. Alaska is a long ways away from most places… but, not too far to get a drink and watch a game.

Above: Some things are unique to Alaska. What in the lower 48 (not 55) we call snow mobiles, Alaskans call snow machines. Here, shown in the above image, is another unique Alaskan practice – at least I haven’t seen it elsewhere. Dollar bills, with identifying marks, are tacked onto the ceiling of the Panorama Bar in Carlo, Alaska. This is a scene I saw replicated in other Alaskan drinking establishments. The tradition originates from mining days when miners, never being sure whether they would be rich or broke when returning to town from mines, would tack a dollar, on which was their signature or mark, to the wall or ceiling of the bar, to ensure, that on their return from the mines , if they were broke, they would be able to buy at least one drink.