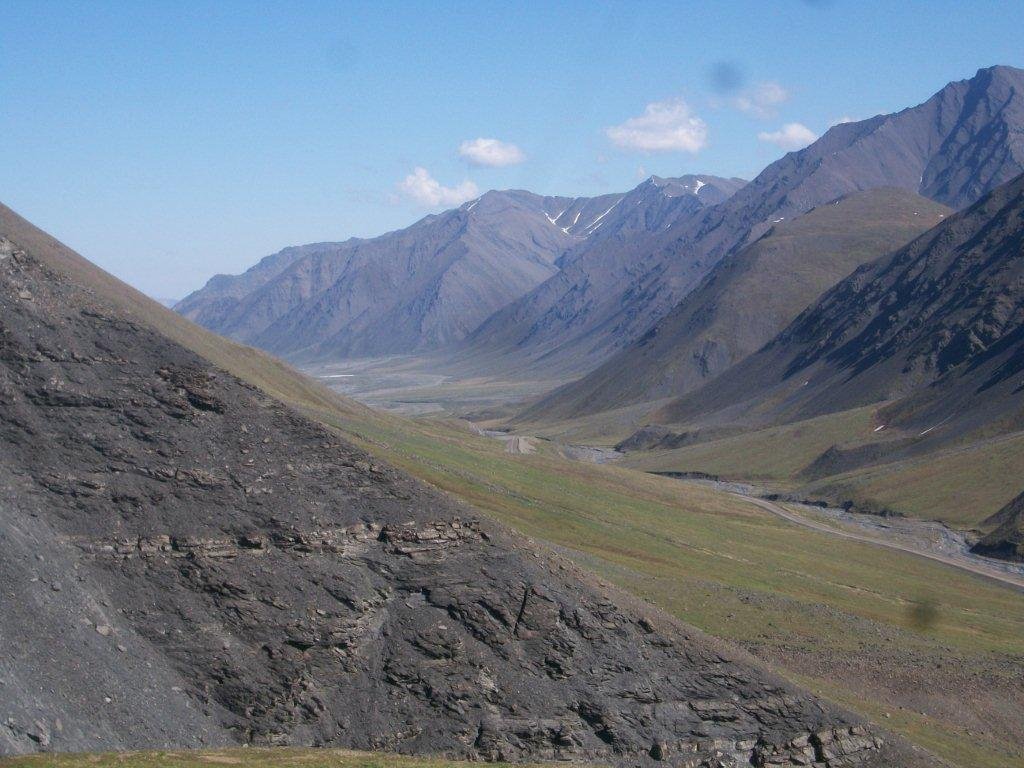 Our bikes might make 240 miles… but, they might not.  “Jethro,” the follow truck, will gas us all up at the half way mark, Atigun Pass.  Coldfoot, in the old days a gold camp, is now a truck stop, with modular rooms for paying visitors, and a 24 hour restaurant, 60 miles north of the Arctic Circle on the haul road.    Our group spent the night in Coldfoot.  More in the log on Coldfoot on the return trip.

Above:  House in Wiseman, 14 miles north of Coldfoot, and three miles east of the haul road.  Originally a gold mining camp, Wiseman has remained an inhabited town since 1910.  It is situated on the west fork of the Koyukuk River, which flows southwest for 200 miles before conjoining with The Yukon River.  Lots of good fishing and hunting outside your house, but, also, lots of “mossies” and remember, temps of 50 below Fahrenheit, and 21 hours of no sun on December 21.  Also, quite far from the nearest Costco.

Not 2 miles further west of Wiseman is the eastern border of Gates of the Arctic National Park, a park with no national park services or roads.   You walk in… fly in, land on a lake… and then, you’re on your own.

Above:   Alaska Pipeline emerges from the ground near Wiseman.  Signs warn against walking on the pipeline.

Above:  Jim fishes near the mouth of a creek which empties into the west fork of the Koyukuk River, near Wiseman.  Grayling are the fish of choice in northern Alaskan rivers.  Jim has a collapsible fishing rod that fits nicely in his motorcycle pannier.  Image looks northwest.

Above:  Jeff Mariska.  Jeff, an employee of Motoquest Tours, rode sweep on our trip.  Originally from Colorado, he has been in Alaska for ten years.  In winter he works at Alyeska Ski Resort near Anchorage, and lives year round in Girdwood, the town where Alyeska Ski Resort is located.  His principle job on this tour is to make sure no one is left behind.  That entails a high level of awareness of where the riders are and an ability to deal with rider incidents that invariably occur… flat tires, accidents, etc.   In this pic, he has ridden into Wiseman, on his KLR,  to look for Jim and me, as the rest of the group had not come into Wiseman (they did on the return) and were heading north.  Jeff has a great sense of humor, was personable, and highly attentive to the tour participants.  He’s a competent mechanic, and all around resourceful… very much one of those guys you want around when the mud hits the fan.

Above:  The haul road approach to Atigun Pass.  The trees are gone, replaced by arctic tundra.  The tree line is governed by a correlation between altitude and latitude.  In Colorado, the tree line is at about 12,000 feet.  In the Canadian Rockies, the tree line sits at 7000 feet.  At the latitude of Brooks Range, the tree line is at 2300 feet (you get this info from the BLM story boards placed along the Dalton Highway).   This pic is taken at about 3000 feet of elevation.  Atigun Pass, the highest drivable pass in Alaska, is about five miles ahead and has an altitude of 4300 feet.    Compared to other ranges in the world, the 9000 foot peaks of the Brooks Range don’t sound very high.   But, the mountains loom as they rise from 2000 foot or below valley floors.  The pipeline in this pic parallels the road to the right, where, at this point,  it runs under ground.

Above:  Jason, “Jethro Driver,” assisted by tour leader Nicole Christensen, gasses up Nicole’s bike, at the top of Atigun Pass.   Nicole is a highly competent tour leader and rider.  Sometimes you get one and not the other.  She is cheerful and informative.  Like Jim, she is a fly fisherman (sic) and all around outdoors woman.   She’d give us briefings and maps each morning, and with Jeff, make sure all riders were making their way along the prescribed route.  She and her husband, Rob Glenney (see pic in Day 3 log), live in Oregon during the off season.  As motorcycle tours go… and I’ve been on a few… ours was quite competently led and managed.

Above:  Dall Sheep, looking northeast from the top of Atigun Pass.  These sheep are juveniles and females.  We didn’t see any of the rams who migrate higher into the range during the summer.  This image resolution was the best I could do with my $100.00 Kodak EasyShare M340 digital camera.  This image is taken at the highest of four zoom options.

Above:  Wow! (at least that’s how I felt when contemplating this vista).  Looking north from Atigun Pass.  The pipeline runs underground here.  You can glimpse the haul road as it works its way north through this glaciated valley floor.  The pass road leads out to the north slope.  From the point of this image, we have about 120 more riding miles to Deadhorse.

Above:  Haul road and pipeline on the north slope.   Here on the north slope, the road is a gravel platform laid, and graded, on the tundra.    The tundra vegetation (and here it has yet to turn green, as it will later in summer) grows on a layer of mud, in spring and summer, only one foot thick.  Below the mud, is permafrost.  Earth frozen solid.  Ice.   The permafrost, which descends underground to as much as 2000 feet, has existed for over 15,000 years since the peak of the last ice age.

Speeds of 60 mph plus could be accomplished on this road in this beautiful weather.   Were it raining, as it often does here, these roads would be slick as grease, and we wouldn’t be able to achieve speeds of more than 30 mph.

As we rode north to Deadhorse on the north slope, a ride of about 110 miles from the Brooks Range, the temperature got progressively colder.  Notwithstanding the sunny day, the temperature was 35 degrees Fahrenheit on our arrival in Deadhorse.