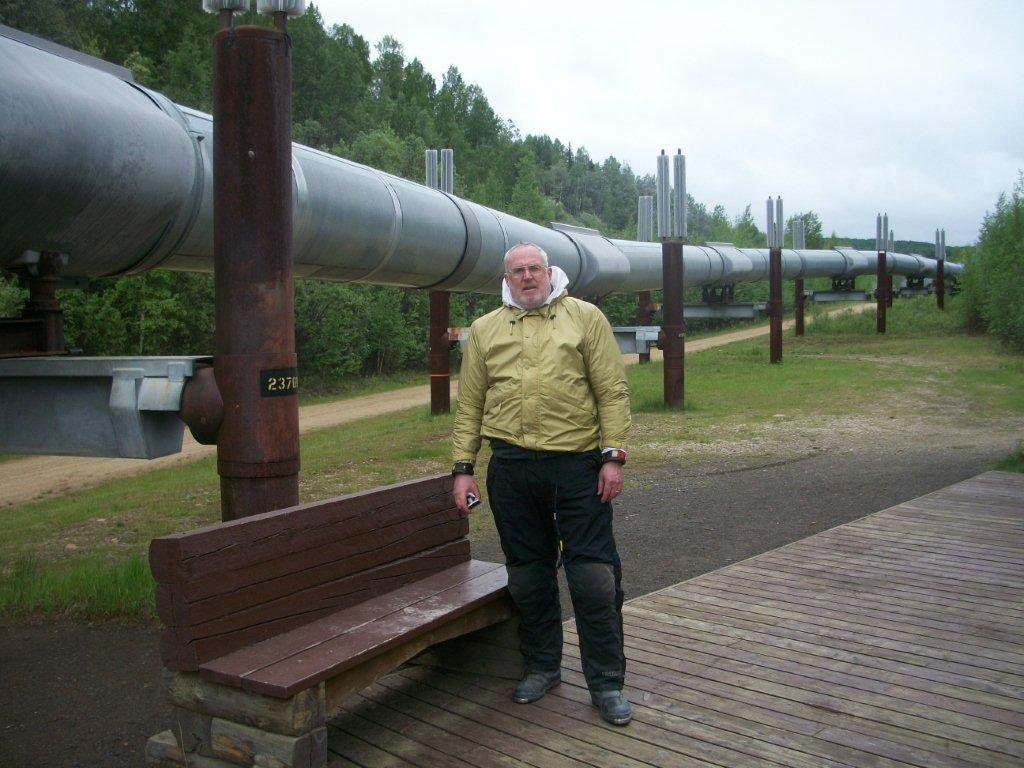 Above: Mwah (sic) at the Alaska Pipeline viewpoint 11 miles north of Fairbanks. Half the 800 mile long pipeline is above ground as seen in the pic. The pipeline has been placed above ground in locations where placing it underground would be inhibited by perma frost, or, where the potential for pipeline or environmental damage was high due to unstable earth. The above ground pipeline rests on “shoes” which can slide back and forth, laterally, on the “H” support apparatus. Today, we started this ride, from Fairbanks to Coldfoot – 250 miles – in the rain. About 50 miles north of Fairbanks, on the Elliot Highway, we rode through some very dense fog. The fog let up just before we arrived at the start of the Dalton Highway, 80 miles north of Fairbanks.

Above: Sign at the pipeline viewing point. I was intrigued throughout the trip with the length of the late Spring days. At this point, on June 6, we are only 15 days away from the summer solstice, the longest day of the year in the northern hemisphere, and, at least officially, the start of summer. Two days from now, we expect to be almost 500 miles north of this point, at Deadhorse, on the Arctic Ocean, 300 miles north of the Arctic Circle, where the days will be even longer than here near Fairbanks. For two to three days a year at Deadhorse, the sun never sets. At the north pole, over 1000 miles north of Deadhorse, the sun does not set for five months… similarly, at the north pole, in northern hemisphere winter, the sun never rises for five months.

Above: Celso and Paulo, two of the ten riders on our tour, standing at the pipeline viewing point, 11 miles north of Fairbanks on the Elliot Highway. Celso is a computer programmer and Paulo is a physician. Both are from Sao Paulo, Brazil. They ride BMW touring bikes in Brazil and showed tour participants images of their rides in Argentina and Chile.

Above: Mwah (sic). The Dalton Highway! The Haul Road! The Ice Road! 80 miles north of Fairbanks. After Jim took this image, I dismounted the bike, and like numerous excited motorcycle adventure travelers before me, defaced the sign with one of my “Big Cat” stickers. Is this kind of like dogs marking their spot?

The thought that I was about to travel where few travelers go left me excited and exhilarated.

In Anchorage and Fairbanks I would engage in casual conversations with locals, who, invariably, asked me where I was traveling. More often than not the reaction to my answer… “Deadhorse,” would be along the lines of, “what are you going up there for?” I’m sure many locals view Deadhorse, Prudhoe Bay and the North Slope more in the context of an arduous work environment than as a vacation or travel spot. It’s a long road up, with few amenities, cold at the top with meager, but very expensive, accommodations. I guess I can see the point… but, for us participants in Motoquest’s tour it was the world of high adventure motorcycling. North to Deadhorse and the Arctic Ocean!

Above: Speed limit sign at the start of the Dalton Highway. Another name for the Dalton Highway, coined by the truckers, is “The Kamakaze Trail.” By regulation, trucks have the right of way on this road, 1/3 paved, 1/3 gravel, and 1/3 packed dirt. The Haul Road has two lanes, and a motorcyclist caught between two trucks overtaking or passing would be in a very tight squeeze. Uphill, the loaded trucks don’t make 50 MPH. On the flat, or downhill sections of the road, the 50 MPH speed limit is… how should I put this?….. Uh, indicative? Who’s there to enforce?

While I was stopped and in the process of taking the above image, three 18 wheelers roared past me, going north, my direction. The three trucks were on a slow ascent so after I resumed my ride, on a spirited motorcycle not inhibited by inclines, I came up against them quickly. I wasn’t sure of the protocols of motorcycles overtaking the big trucks on the Haul Road. I could certainly get around the three behemoths as they were moving at 35 mph up hill… but, what would happen as we started to descend? The road was gravel and I wouldn’t be able to ride above 50 mph should the gravel be heavy on the descending road section. I didn’t want these three Haul Road truckers roaring up into my backside. Riding the Gobi Desert on a BMW Funduro in Mongolia in 2001, tour company employee Mika, driving a huge six wheel Kamaz support truck, would come up on my behind at sixty mph and scare the hell out of me. He’d then forge his own path on the open desert to my right, ride up beside me, and give me a big grin. Very funny.

The down hill section of the road was light gravel on packed dirt. I settled in at a speed of 60 mph. I looked in my rear view mirror, and whoa! these three trucks, one a Kenworth hauling logs and another a cab-over Pete with a reefer on (just kidding) were gaining on me. I stepped up the speed a bit and within a mile arrived at another uphill grade. From this point I didn’t see the three trucks again as I could maintain roughly the same speed uphill as I could going downhill, where they were hamstrung on the uphill segments. Interestingly, during the remaining 800 miles on the Haul Road (up and back), I would not experience a similar anxiety induced truck experience. On balance, I found, that the trucks were few and spaced far apart, and, as I gained experience on the road, I could maintain a speed at or above the normal truck speeds.

Above: The Dalton Highway within first 40 miles and adjacent Alaska Pipeline. The landscape will change greatly as the highway enters the Brooks Range, and beyond that the tundra clad North Slope.

Above: The Brooks Range, in the far distance. Between this point where I am taking the image, Gobblers Knob, and the outlines of the Brooks range in the distance, are three notable features. First, the Arctic Circle. There is a BLM stop-off point at the Arctic Circle. I have a better image of the Arctic Circle BLM sign on my return, so, I’ll show/discuss that in a later post. Second, the lowest recorded ambient temperature in North American recorded history was at a mining camp, midway between where I’m standing to take the image, and the Brooks Range in the distance – Minus 84 degrees Fahrenheit. Third, Alyeska Pipeline Pump Station Five is 30 miles further up the Haul Road at the base of the Brooks Range. Of ten pump stations along the 800 mile long pipeline, Pump Station Five is the only station having the purpose of braking the downhill flow of oil… in this case, coming down from the 4200 foot Atigan Pass of the Brooks Range.

The Brooks Range extends east to west across most of the state of Alaska between one hundred and one hundred forty miles south of the Arctic Ocean, and between forty and eighty miles north of the Arctic Circle. The range, with peaks at 9,000 feet, is an extension of the American and Canadian Rocky Mountain ranges. The range bends from a north west to south east direction found in Canada and to a lessor extent in the lower 48 (Alaska term), to the east-west configuration found in Alaska. The “bend” in the range corresponds to the crescent shape of the Pacific tectonic plate as it “subducts” under the North American plate. Those two plates are still moving into one another and account for Alaska’s select position on the ring of fire and its resultant high susceptibility to earth quakes and volcanic eruptions. Further south, in the Alaska Range (which corresponds to the lower 48 – not lower 55 – Sierra and Cascade ranges), Mt. McKinley is said to increase in height by 3/4 inch a year as the two tectonic plates clash against one another.

Above: BLM sign at Gobbler’s Knob. The BLM has done an excellent job in placing story boards along the Dalton Highway. I stopped at all signs I saw (about 20) and learned a lot.